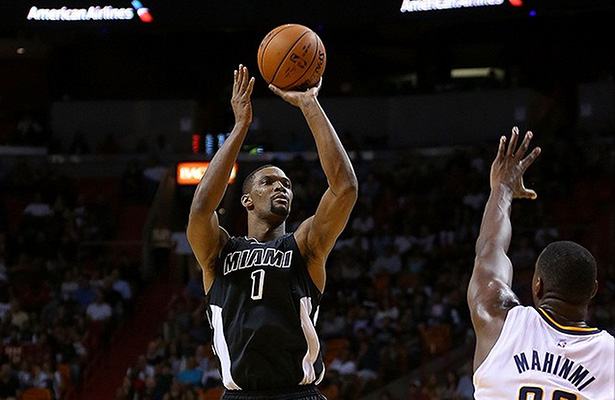 The Heat led by as many as 21 points on three different occasions in the first half and entered halftime with a 54-37 lead. As has been the case for the entire season, Miami struggled in the third quarter as they were outscored 27-21 in the period. Indiana ended the third quarter on a 9-0 run and continued their momentum early on in the fourth, culminating their run by outscoring the Heat 17-2 during the stretch.

Though the Pacers never held a lead in the second half, they came close—the Pacers’ George Hill converted on a driving layup with 7.2 seconds remaining to cut Indiana’s deficit to just one point, at a score of 88-87. The Pacers then fouled Dwyane Wade, putting him on the free-throw line where he would hit just one of two free throws.

After a Pacers timeout, Indiana inbounded the ball, where Hill passed to a wide-open C.J. Watson in the right corner. Watson would miss the game-tying two-pointer as time expired.

Deng stated that the game was a “story of two halves”:

“We didn’t do a good job tonight. We got lucky that they ran out of time. I thought first half we were great, second half they were great. It was two halves, two completely different halves. We gotta look at the first half as who we are, moving the ball and guys getting open shots. The second half was their game because we held the ball. That’s Indiana’s game.”

The Pacers were led by Luis Scola’s 14 points and seven rebounds. C.J. Watson notched 13 points as did George Hill, who made his first appearance since December 31 (when Hill suffered a groin injury in a victory over the Heat). Tonight’s appearance was Hill’s sixth game of the season.

The defense played well, as they held Indiana to just 41 percent shooting. The unit forced 18 turnovers, including 14 in the first half alone.

Unfortunately for the Heat, Miami turned the ball over 18 times overall themselves. They scored just 35 points on 38 percent shooting in the second half after scoring 54 points on 58 percent from the field in the first half.

Coach Erik Spoelstra summarized why the Heat struggled in the second half in comparison to earlier on in the game:

“We got a bounce at the end. There was so many good things going on in this game, and then they made a big momentum push in the last six minutes of the fourth quarter and really sped up the game, which is what we were trying to do.”

The offense’s inability to score points in the second half continues to be an issue for the team. The Heat are averaging just 38.6 points per contest in the second half in the month of January. Their overall scoring per game during the month is at just 86.4 points, the worst mark in the league.

This game exemplified everything that has been wrong for the Heat this season—terrible offensive execution, a sluggish third quarter and another second half blown lead.

In spite of all that went wrong for the Heat, they came away with a victory to improve to 8-13 at home on the season.

For the second consecutive game, Hassan Whiteside was absent due to an ankle injury suffered versus the Oklahoma City Thunder on Tuesday night. Chris Andersen started in his place at center and was ferocious on the glass as he led the team with 13 rebounds.

Andersen stated to Sun Sports’ Jason Jackson that it was “attitude” that led to him grabbing 13 rebounds in the victory:

“Just got torn up on the glass up there in Charlotte so I came out with a little more attitude this time.”

The victory marks the first time that the Heat have defeated the Pacers this season in three tries.

The Heat will travel to Chicago for a one-game road trip to play the Bulls. The game is set for Sunday afternoon at 1:00 PM EST and will be broadcast nationally on ABC.
[xyz-ihs snippet=”Responsive-ImagenText”]