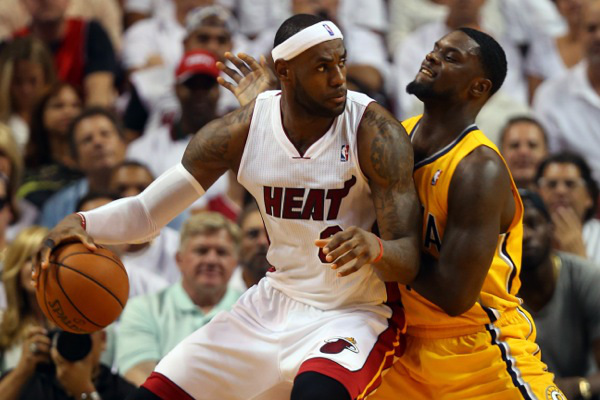 Days after Lance Stephenson stated that the recent trash talking by LeBron James was due to Stephenson getting under LeBron’s skin and a “sign of weakness,” looks like Lance has backtracked on his comments.

I mean, if the guy that you’re badmouthing to the media about, decides to drop 32 points, 10 rebounds, and five assists on you, it’s certainly not a good look. This is why you should never open your mouth until after you’ve had success. Just ask LeBron about his 2010-2011 playoff campaign.

Initially after Game 4, Stephenson boldly stated that he had “no regrets” and adamantly stood by the comments he made about James. But it seems like he and the Indiana Pacers may have some regrets after all.

Both Paul George and Stephenson both admitted to saying things they shouldn’t have. “I think this stuff bothered us a little bit,” Stephenson said.

At Wednesday’s early afternoon shootaround, Stephenson also stated, “I think I said some things that shouldn’t have been said. Also Paul (George). We just gotta play basketball and stop worrying about all the other stuff” (Per SportsIllustrated).

We warned you Lance, even your own teammate Paul George warned you: if you’re going to trash talk somebody, pick anybody, somebody other than LeBron James. In the wise words of Paul George, “He’s doing it to the wrong guy. He’s barking up the wrong tree. LeBron is the same way, he feeds off that kind of energy.”

Miami has a chance to close out the Pacers tonight at Bankers Life Fieldhouse at 8:30 PM E/T.