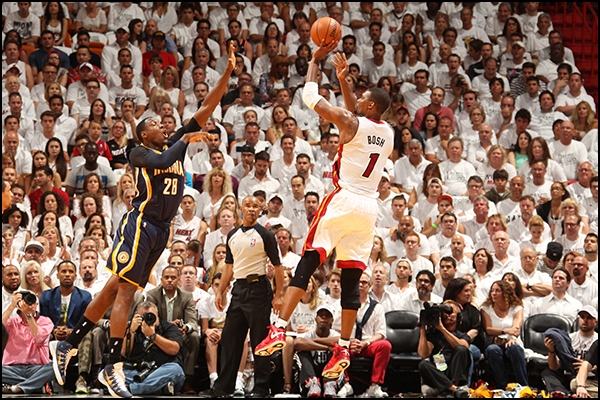 (Miami, FL) — LeBron James beat his chest, raised his arms to pump up the home crowd and let out the raw emotion that was bottled inside of him.

The Miami Heat scored 31 first quarter points en route to a 102-90 victory to take a commanding 3-1 series lead in the Eastern Conference Finals.

Chris Andersen found himself out of the lineup, hampering a thigh contusion. Miami did not seem fazed by the absence of its muscle down low. With a smaller, quicker lineup, the Heat jumped out to a 27-19 lead in the first quarter, dominating on both offense and defense, led by Chris Bosh.

“The good start helped, we came out with a tremendous amount of energy on both ends of the court,” Heat Head Coach Erik Spoelstra said.

Bosh scored Miami’s first eight points, nailing two three pointers in the first two minutes to ignite the home crowd.  It took Bosh five minutes in game four to score more points than he did in each of the first three games of the series.

“I felt it was going to happen today,” James said about Bosh. “I told him he was going to have a great game; we got off to an early lead because of him.”

With Roy Hibbert matched up against him, Bosh drifted to the outside when Hibbert’s attention was down in the paint.  Using his ability to knock down contested shots from mid-range, Bosh carried the Heat offensively in the first half, a burden usually left for James. Bosh scored 17 of his 25 points in the first half where Miami led 49-44.

“For me it’s always a frame a mind,” Bosh said. “If you don’t feel like you’re struggling then you’re not.”

With 1:15 seconds remaining in the third quarter, James took a defensive rebound coast to coast for the jam to give Miami a 76-59 lead and slamming the door on an opportunity for Indiana to mount a comeback. James scored 14 of his 32 points in the third quarter, also adding 10 rebounds and connecting on 66-percent of his shots.

“He does it within the confines of what we do,” Spoelstra said about James. “I didn’t even have to call a play for him; he reads the game better than anybody.”

Wade struggled from the field, connecting on just 33-percent of his shots, but he managed to make all seven of his free throw attempts, finishing with 15 points. Going forward for the Heat, as long as either Wade or Bosh can contribute offensively, James is more than capable of handling the rest.

Taking a look at the box score, the Pacers made three more total shots, made one more three pointer and outrebounded the Heat. However, the glaring discrepancy was in the turnovers and free throws.  Indiana committed nine more turnovers than Miami, who also made 19 more free throw attempts than Indiana, connecting on 30-of-34 of them.

“They are the best offensive team in the NBA,” Vogel said about the Heat. “They have great weapons and they are very difficult to guard.”

Indiana made a late 14-1 run with four minutes left in the game to cut the score to 95-84, but was unable to close the gap any further.

“This series in particular, more than any yet, we have had to go deeper into our bench and it’s critical,” Spoelstra said.

Paul George led the way for the Pacers with 23 points and six rebounds but also turned the ball over a game-high five times, leading to fast break points for the Heat.  Miami used both James and Wade to cover George defensively, but found more success with the size of James than in Wade’s case.

David West thrived against the smaller lineup that Miami used, scoring a series –high 20 points and grabbing 11 rebounds.  With Andersen out, the contribution from Hibbert was expected to increase but his offensive game arrived empty handed. Hibbert missed all four of the shots he attempted and managed to pull down just five rebounds while committing four personal fouls in 21 minutes.  For the Pacers to win game five back in Indianapolis, the seven-foot-two-inch Hibbert will need to be a force in the paint.

214-out-of-222 times, a team leading 3-1 in a best-of-seven playoff series goes on to win the series.  The Heat will head back to Indianapolis for a chance to become the 215th team on Wednesday.