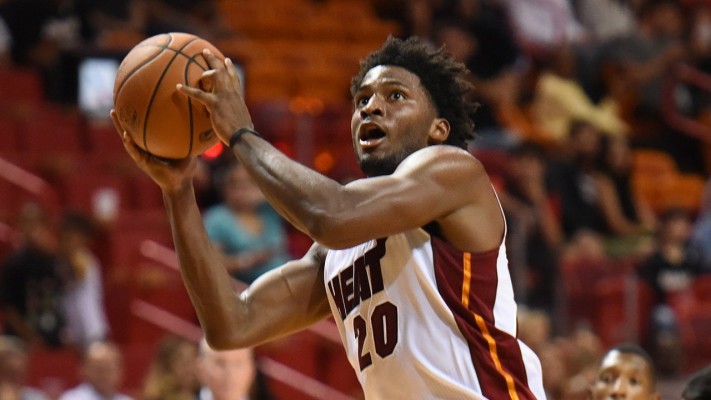 Justise Winslow still has a lot to prove to live up to the expectations the Miami Heat had for him when they drafted him in 2015, but it appears the Heat have faith in Winslow’s future. On Tuesday, the Heat announced that they have exercised their fourth-year option on the talented small forward, guaranteeing him $3.44 million for the 2018-19 season.

The Heat celebrated the achievements Winslow has already reached in his young career in an official team statement:

“He was one of eight HEAT players to average double-figures in points (10.9) last season, marking the most for any team in the NBA. The former NBA All-Rookie Second Team selection appeared in 78 games in 2015-16, becoming just the fifth rookie to lead the HEAT in games played during a single-season.”

Though Winslow was only able to take the court for 18 games last season due to multiple injuries, he is still seen as a large part of the team’s future. In his 96 career games, Winslow has averaged 7.3 points, 5.2 rebounds, and 1.9 assists per game.

Winslow enters the 2017-18 season as one of the frontrunners to assume the starting small forward position, and will compete with Josh Richardson and Rodney McGruder to claim the role. Barry Jackson of the Miami Herald recently spoke to team president Pat Riley about Winslow’s chances to become the starter this season.

“It’s up to him. He was short-circuited by the wrist and the shoulder. Justise is going to compete like crazy to start,” he said. “The great thing about Spo (Erik Spoelstra), is when we come into training camp, it’s open.”

The Heat continue to solidify their core of players for the future through a slew of offseason contract extensions. With extending Winslow’s contract, the Heat’s future looks quite bright.
[xyz-ihs snippet=”Responsive-ImagenText”]