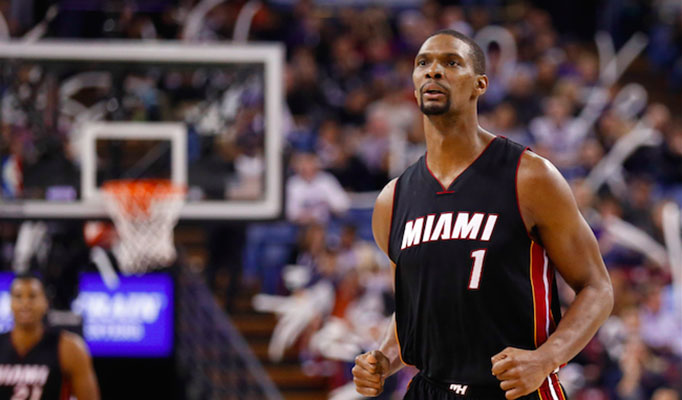 **UPDATE (4:02 PM) — Bleacher Report’s Jared Zwerling is reporting that the clots are in both of Bosh’s lungs. He continues to be evaluated.

**UPDATE (11:51 AM) — Coach Erik Spoelstra has stated that there has not been a full diagnosis yet, and Bosh’s condition is not life threatening. More news to follow.

The Miami Heat may have some bad news entering the post All-Star break.

Just a day after it was reported that Chris Bosh would miss Friday’s game versus the New York Knicks due to an “illness,” new reports suggest it may be more serious than that.

Barry Jackson of The Miami Herald says that doctors have initially diagnosed Bosh with blood clots in his lung. Jackson stated the following:

“Doctors believe Chris Bosh has a blood clot on his lung, a condition that typically would sideline players for the duration of the season, according to a league source with knowledge of the situation.

Bosh remains at a local hospital and is believed to be on blood-thinner medication. He is weak and fatigued, but the longterm outlook is good.

Though nobody has definitively ruled Bosh out for the season, it’s difficult to envision him returning because of the nature of the blood-thinner medication and the toll such a condition takes on the body.

It is unclear if Bosh will require any surgical procedure.”

Just a day after acquiring Goran and Zoran Dragic from the Phoenix Suns through trade, a huge damper has been put on the Heat’s fortunes for the rest of the year. Miami is currently thin at the forward position as they sent Norris Cole, Justin Hamilton, Shawne Williams and Danny Granger through deals in order to acquire the two brothers.

The hope was that the Heat would field a championship-contending lineup with Hassan Whiteside, Bosh, Luol Deng, Dwyane Wade and Goran. That may now not become a reality as Bosh may be out for the rest of the season.

To supplant the possible long-term loss of Bosh, the Heat are calling up Henry Walker from their D-League affiliate Sioux Falls Skyforce to a 10-day contract.

Bosh is currently averaging 21.1 points and seven rebounds per game thus far during the 2014-15 season. The Heat signed the veteran to a five-year contract worth $118 million in July last summer. Bosh currently has the largest guaranteed contract and the fifth-largest annual salary in the NBA.
[xyz-ihs snippet=”Responsive-Ad”]