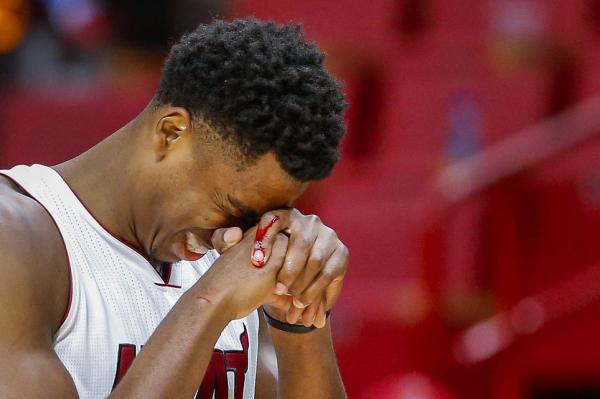 After abruptly leaving Tuesday’s contest against the Phoenix Suns due to a right hand laceration, Miami Heat center Hassan Whiteside says he intends to play Thursday night when the Toronto Raptors come into town.

Whiteside, 28, left late in the fourth quarter after clipping his hand against the backboard while going for a block. Aside from the scary incident, the star center had a terrific game as he led the Heat with 23 points, 14 rebounds, three steals and two blocks in 31 minutes.

In the process, Whiteside passed Heat great Rony Seikaly with most rebounds for a single season in Heat history and also set a franchise record with his 13th consecutive double-double. The 7-foot center is quickly becoming a franchise star as he continues to write himself into the history books.

On Monday, the NBA named Whiteside the Eastern Conference Player of the Week after a stellar stretch of games to build on his already strong year. On the season, the big man is averaging career-highs in scoring and rebounding with 16.7 points and 14.2 boards, respectively, while blocking 2.1 shots a game.

The Heat take on the Raptors Thursday at 7:30 p.m. ET in South Beach.
[xyz-ihs snippet=”Responsive-ImagenText”]