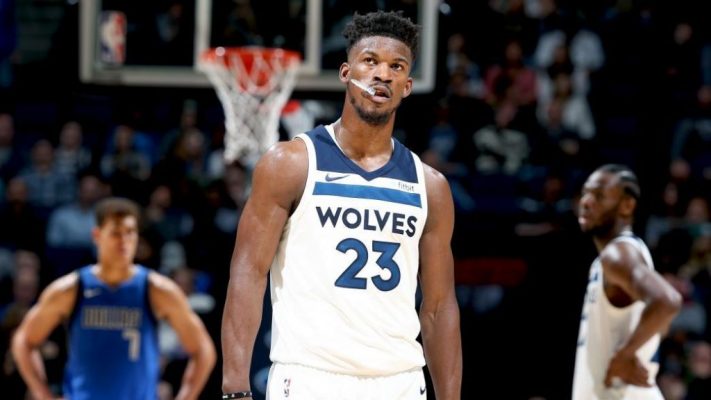 On Thursday, it was reported that the Houston Rockets were offering the Minnesota Timberwolves a jaw-dropping four first-round draft picks in return for All-Star Jimmy Butler. Now, some executives around the league are wondering if the Wolves purposefully leaked that information to try to bring the Miami Heat back to the negotiation table.

That belief was first reported on Saturday afternoon.

Did the Minnesota Timberwolves leak the Houston Rockets' offer of four first-rounders in order to get the Miami Heat back to the table? Some NBA executives believe that's the case… pic.twitter.com/zuhvck6UTI

“Anytime something leaks there is always some curiosity about why it’s being put out there,” Alex Kennedy explained. “A lot of executives look at this Houston-Minnesota negotiation and wonder is this Minnesota trying to get Miami back to the table to offer a draft pick or multiple draft picks. … During the Miami talks, things were leaking left and right, it makes me wonder, and executives around the NBA are wondering this as well, if Minnesota is leaking these trade talks to try and get more out of Miami.”

If that’s Minnesota’s way of trying to bring team president Pat Riley and the Heat front office back to the table, it’s a pretty odd way of doing it. Following the breakdown of the previous trade talks between the two organizations, it was reported that Miami made it clear that they would be willing to negotiate only if the Wolves were to approach it with a potential deal.

Thus far, no potential offer from the Wolves has been reported.

It will be interesting to see what ends up happening, if anything, regarding the Butler drama. Considering how poorly they have handled things up to this point, it wouldn’t be much of a surprise if the Wolves end up losers in any trade that ends up taking place.
[xyz-ihs snippet=”HN-300×250-TextnImage”]