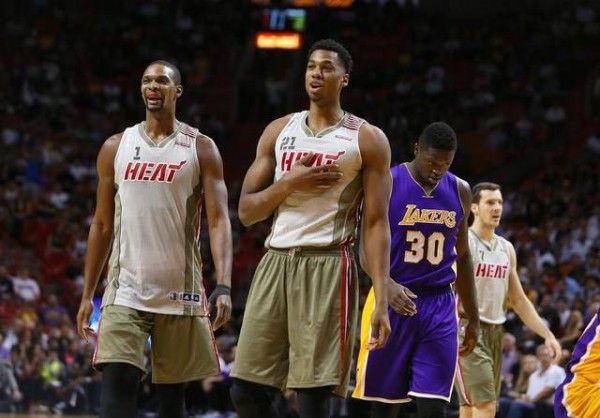 The list of teams scheduled to pursue Hassan Whiteside seems to be growing by the day.

Earlier today, ESPN.com’s Marc Stein and Ramona Shelburne reported that the Los Angeles Lakers are going to aggressively pursue Whiteside on July 1st. This report follows rumors that Mark Cuban has put Whiteside and Mike Conley atop the Dallas Mavericks targets this offseason.

After using their second pick in the NBA Draft to select Duke University forward Brandon Ingram on Thursday, the Lakers indicated their next priority was acquiring rim protection. This makes Whiteside a clear choice for Los Angeles as the league’s best shot-blocker.

Earlier this year, Whiteside had some thoughts about playing in big cities like New York and Los Angeles.

“I feel like [Madison Square] Garden and the Staples Center are like the two biggest places to play,” he said on March 30th. “I feel like those places are just special just because there are so many celebrities and everybody is there.”

But he has also been quick to note that the Miami Heat was the team that gave him the chance to break through and display his potential this year.

“I worked out for the Lakers before I worked out with the Heat. So, I mean, they’ve seen it. They had a chance to see what I could do,” Whiteside noted on a road trip to Los Angeles during the regular season.

With the Heat rumored to be setting up meetings with Kevin Durant, Pat Riley should make sure Hassan isn’t being lured away by the glamour and glitz of Los Angeles. Heat fans can only hope that Whiteside still remembers the latter of those statements as he sits down for a meeting with the Lakers.
[xyz-ihs snippet=”Responsive-ImagenText”]