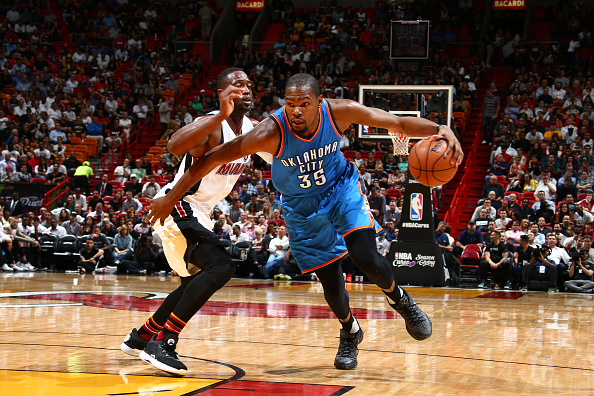 The first step into luring superstar Kevin Durant to the Miami Heat is in place.

According to Adrian Wojnarowski of Yahoo! Sports, the free agent will host meetings starting July 1 and the Heat are on his list:

It’s clear the nine-year veteran has one thing in mind when choosing his next team: winning titles. Which means Durant likely will not be giving other teams a chance.

“Several teams that have interest in Durant — the Denver Nuggets, New York Knicks, Los Angeles Lakers, Houston Rockets and Washington Wizards — could still find audiences with him, but appear to be outsiders in the process now.” Wojnarowski added

Despite the multitude of teams gauging interest in Durant, Heat fans have to be happy with their chances. Even though the Warriors, Spurs and Thunder pose better records, none of those teams will have Pat Riley talking to Durant come July 1.

All Riley needs is a meeting. He convinced LeBron James and Chris Bosh to come to the Heat back in 2010 and lured Ray Allen, Mike Miller, Joe Johnson and Luol Deng, to a name a few over the years. Getting in the room with Durant will set the foundation for a possible change. The countdown starts July 1.
[xyz-ihs snippet=”Responsive-ImagenText”]