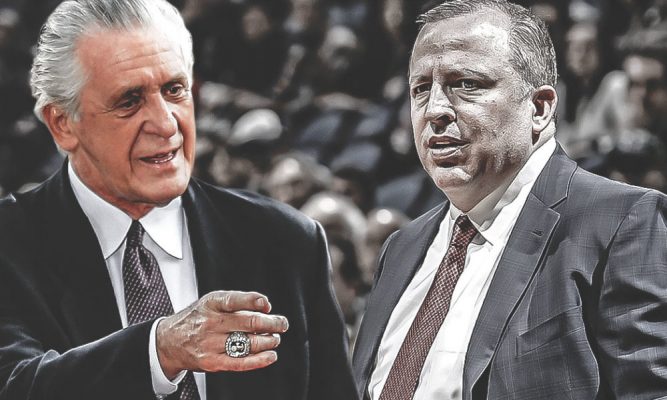 Earlier this week, it was reported that during the breakdown of trade talks between the Miami Heat and Minnesota Timberwolves, Heat team president Pat Riley swore at Wolves head coach Tom Thibodeau before hanging up the phone in frustration.

The report seemed to signify not only an emphatic end to the trade talks regarding All-Star Jimmy Butler, but also pointed to just how frustrated Riley had become with the entire situation.

On Friday, Riley issued a statement regarding the rumored interaction with Thibodeau, denying that any kind of profanity was used during trade discussions.

Pat Riley statement: "As to what has been reported in the past 24 hours, I have too much respect for Tom Thibodeau and all that he's accomplished in the league. Our conversations have been nothing but cordial . . . "

". . . and I have never used that kind of language in negotiations. But I do admit to telling Danny Ainge to . . ." (That reference to his "STFU" quote during the LeBron Era.) https://t.co/LtAslAWeu7

It’s impossible to know what exactly took place between Riley and Thibodeau as the Heat worked as hard as they could to land on a deal good enough to acquire Butler. What does seem abundantly clear is that both sides are no closer to getting a deal done now than they were several weeks ago.

On Wednesday, Butler joined his Timberwolves teammates for a news-grabbing scrimmage. While he may not be happy with his current squad, he has seemingly accepted the fact that he may very well begin the 2018-19 season in Minnesota.

It will be fascinating to see if Riley and the Heat try to bring Butler to Miami before the trade deadline arrives in early February.
[xyz-ihs snippet=”HN-300×250-TextnImage”]