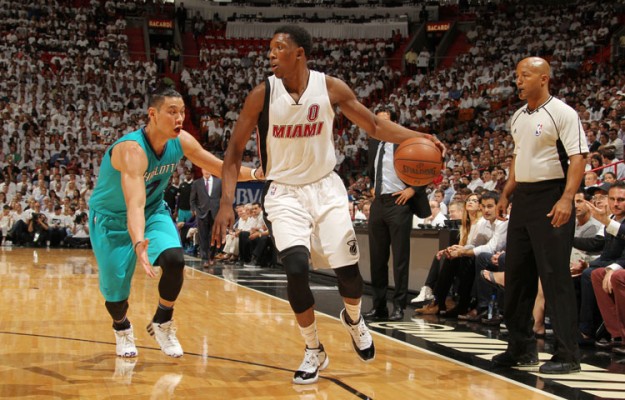 The Miami Heat have already re-signed several veterans this offseason and the next to put pen to paper may be Josh Richardson. The 2017-18 season will mark the final year of his current contract, but the Heat have the opportunity to re-sign him to an extension before he becomes an unrestricted free agent next June.

The Heat could improve their chances of retaining Richardson with a three-year deal worth over $30 million, but it might end up not being enough. According to the Miami Herald‘s Barry Jackson, Richardson will likely consider the offer, but may decide to leave the offer on the table in the end:

“The Heat is expected to discuss an extension with him, and my impression is that Richardson will at least consider it, though a strong case could be made for gambling on himself and waiting for restricted free agency next summer.”

The Heat will be able to offer Richardson up to a four-year, $43 million contract. It will then be up to Richardson to choose between accepting an offer by the start of the regular season or opting to become a restricted free agent next summer.

Thanks to the Heat having Richardson’s Bird Rights, Miami will be able to exceed the cap next offseason in order to match another team’s offer, but if he has an exceptional 2017-18 season, his price could go up. Even if Richardson ends up signing next summer, however, his contract is unlikely to put the Heat over the projected $125 million luxury tax threshold for the 2018-19 season.

Through his young career, Richardson has shown the ability to play solid defense and be a playmaker on the offensive side. During his rookie season Richardson showed incredible skill from the three-point line, shooting 46.1 percent from beyond the arc in a relatively small sample size. That percentage dipped down to 33 percent last season, but if he is able to regain his rookie form from three, he could demand a much richer contract.

Time will tell how the Heat feel about keeping Richardson on their squad for future seasons, but it seems that both parties are, at the very least, considering a multi-year commitment.
[xyz-ihs snippet=”HN-Native-EndofArticle”]