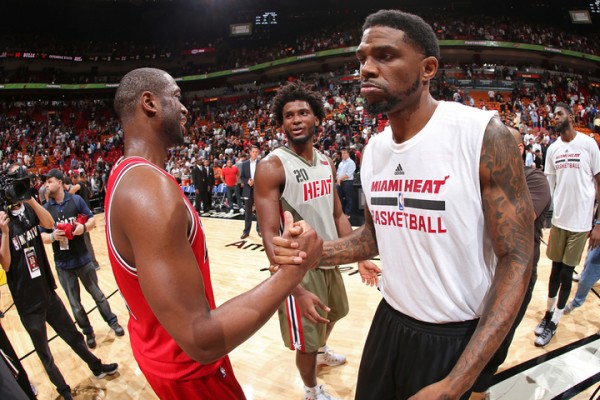 With rumors swirling that Dwyane Wade and the Chicago Bulls are likely headed towards a contract buyout, Wade’s former teammate and current Miami Heat forward Udonis Haslem is letting Wade know that Miami would welcome him back with open arms.

Haslem recently joined the “Joe Rose Show” to send the message out to Wade:

He continued to express that Wade’s time in Chicago may very well be coming to an end:

Haslem’s words come just one day after Heat star Hassan Whiteside sent a clear message on Twitter pointing to his interest in reuniting with Wade as well.

According to ESPN‘s initial report, a contract buyout between Wade and the Bulls may still be months away, but if a buyout does take place, Wade would be able to sign with any team for a pro-rated minimum. If Haslem’s words are of any indication, it appears Wade would be more than welcome to continue his career back in Miami.
[xyz-ihs snippet=”HN-Native-EndofArticle”]