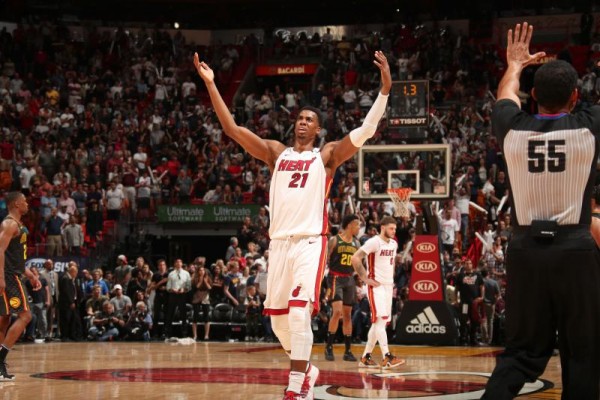 If there’s one big man that knows how to make it through controversy and come out clean on the other side, it’s Hall of Fame big man and former Miami Heat champion Shaquille O’Neal.

O’Neal tapped into his own experiences and recently shared some crucial advice to current Heat big man Hassan Whiteside, who made headlines when he unleashed a profanity-laced outburst regarding his lack of playing time late in games.

“Sometimes as a player you have to understand strategy,” O’Neal said according to the Miami Herald‘s Barry Jackson. “Yes Whiteside is a big man; he’s a fabulous big man. But he’s not the traditional big man which you call the term five.

“When teams go small, Erik Spoelstra knows what he’s doing, says, ‘Hey, let’s go small, let’s trap, let’s rotate, get some steals, create some fast breaks. [Whiteside] has a legitimate beef. He really does. He made the comments hey, there’s lot of teams that want a center. He is correct.

“But he needs to understand strategy. If I was him, I would say OK I’m going to [let] coach do what he do, but I’m going to get a rest. Because playoff time when the game slows down, they’re going to need you, big man. Don’t let all that stuff [bother you]. I know as a player we want to play all the games. But I didn’t win championships until I had 15, 20 games off.”

Whiteside proved his worth in Tuesday night’s playoff-clinching win over the Atlanta Hawks. He finished the night with 18 points, 12 rebounds, and three blocks, including a go-ahead basket with just under a minute left in the game.

O’Neal isn’t the only Heat legend that has come out to share wisdom with Whiteside. Dwyane Wade expressed his support earlier in the week and it seems as though the entire organization is looking to make amends with its frustrated big man.

Hopefully Whiteside takes O’Neal’s message to heart. With the playoffs less than two weeks away, it’s quite possible that the 7-footer will be seeing quite a bit of late-game action. If that comes to pass, it will be up to him to prove that he’s ready for the challenge.
[xyz-ihs snippet=”HN-300×250-TextnImage”]