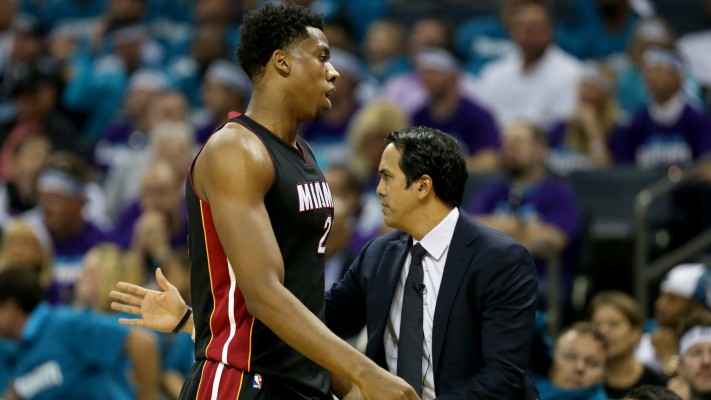 The epic rant that Miami Heat center Hassan Whiteside unleashed following Saturday night’s loss to the Brooklyn Nets obviously didn’t escape the notice of the team’s head coach, Erik Spoelstra. Comments regarding the controversy, which led to a subsequent fine by the team on Sunday, were offered by Spoelstra on Monday.

At the same time, Spoelstra indicated that he considered the matter over:

“I talked to him,” Spoelstra said according to Shandel Richardson of the Sun Sentinel. “We’re moving on. It’s behind us. You can tell right now by the mood of the gym that’s long gone. The only reason we’re addressing out of obligation to all of you because it really is a team matter, a family matter. We’re focused on getting the next one and securing our spot in this dance.”

Whiteside’s aggravation on Saturday stemmed from the fact that Spoelstra removed him in place of a smaller lineup late in the fourth quarter. The loss at least temporarily delayed Miami’s opportunity to clinch a playoff spot.

The frustration felt by Whiteside, who did apologize for the outburst on Monday, has periodically surfaced during his tenure with the Heat. It’s also been fueled by injuries that have kept him out of 28 games this season.

In an effort to avoid a recurrence of the issue, one of the most respected voices on the Heat, veteran Udonis Haslem, offered himself and other teammates as a sounding board for Whiteside in the future:

“We’re letting Hassan know that we’re here for him as a team, beyond basketball,” Haslem said. “I told him to come to me, talk to me about it. I’ve been here. I’ve seen a lot of things. I’ve been through every situation as a player. So when you’re going through things and you’re frustrated, reach out to one of your brothers and we can kind of help calm him down. Just take a step and think about some things before saying them. We want Hassan to be passionate about playing. We want Hassan to be passionate about going out there and helping this team win ball games.”

The Heat currently have the seventh seed in the Eastern Conference with a 41-36 record and would face the Boston Celtics in the first round of the playoffs if both teams stay in the same positions. They’re currently one game behind the Washington Wizards for the sixth seed with five games left. The first opportunity to make a move for that spot will be on Tuesday night, when the Heat host the Atlanta Hawks at American Airlines Arena. Tipoff is set for just after 7:30 p.m.
[xyz-ihs snippet=”HN-300×250-TextnImage”]