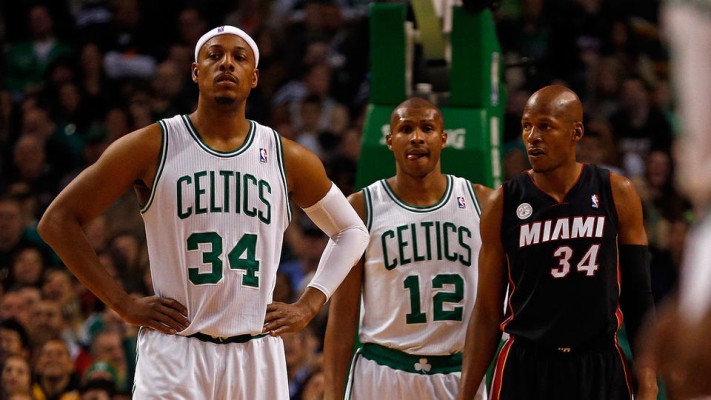 When Ray Allen left the Boston Celtics to join the Miami Heat in 2012, he made a lot of enemies. Not only did the Celtics fan base quickly turn on him, but even his former Boston teammates considered Allen an enemy.

While the beef had showed no signs of slowing down, Allen’s former teammate and Celtics legend Paul Pierce took to Instagram on Saturday to try and mend old wounds.

Allen and Pierce met at the 2017 Super Penguin Basketball Celebrity Game in Shanghai, China and — according to Pierce’s Instagram post — the reunion could not have gone better. Pierce captioned the photo asking former Boston teammates Kevin Garnett and Rajon Rondo to let bygones be bygones and welcome Allen back into the Celtics family.

Garnett and Rondo are known to be passionate competitors both on and off the court so it may take more than an Instagram post to convince them to fully forgive Allen. Still, it’s great to see that Pierce is working to facilitate the long-delayed healing process.
[xyz-ihs snippet=”Responsive-ImagenText”]