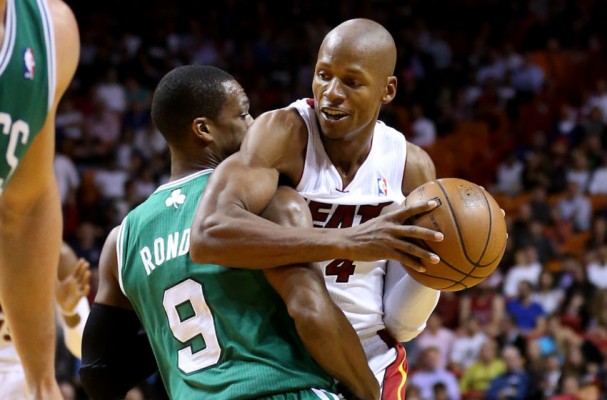 However, former Miami Heat and Celtics star guard Ray Allen did not seem to get an invite to the show and his ex-teammates openly took shots at him for the way he departed Boston for Miami following the 2011-12 season.

“It was more than basketball for us… It felt like a sour breakup.”

Allen then responded with a subtle jab at his former Celtics teammates in a since-deleted Facebook post on Tuesday morning.

Allen’s biggest issue was with Rondo, who said on multiple occasions that Allen didn’t “bleed green” like the rest of his Celtics championship teammates. Rondo also refused to invite Allen to the team’s reunion barbecue this summer, and the Celtics allegedly agreed it would be “on Rondo” to reach out to him if there were to ever be a reunion.

Yikes. All these years later, his former teammates don’t seem to have moved on very much at all from Allen’s decision to play for the Heat, where he ended up with his second career championship ring after Miami’s thrilling seven-game series victory over the San Antonio Spurs in the 2013 NBA Finals.
[xyz-ihs snippet=”Responsive-ImagenText”]