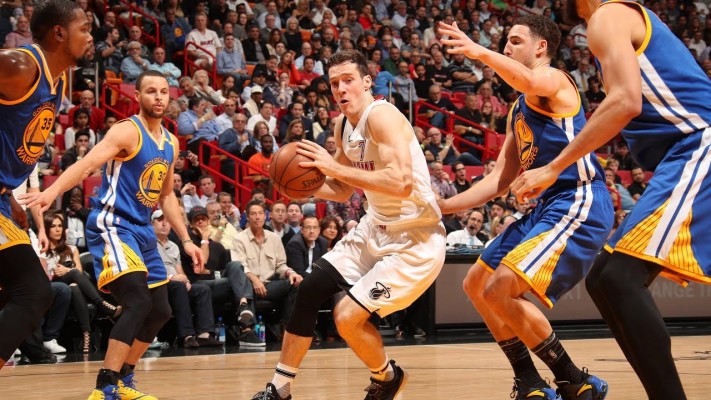 In today’s NBA, the pursuit for a championship seems to be a one-horse race with the Golden State Warriors rested firmly atop the league. As the Warriors look forward to defending their second title in three years, teams like the Miami Heat must search for ways to wrestle it away.

Luckily for the Heat, team president Pat Riley is a proven winner and knows what it takes to create a championship team from the ground up. Riley recently spoke with Barry Jackson of the Miami Herald to break down how the the Warriors became so dangerous, and what it will take for the Heat to catch up to them.

“Golden State grew organically and also they drafted well, but they also made some very good acquisitions via trade and free agency. They got Andre Iguodala, they ended up getting Andrew Bogut in a trade,” Riley explained. “The very first championship they won, they signed Shaun Livingston. They were beginning to go that way and they drafted Draymond Green in the second round. So they had a very low contract with Steph (Curry), they got Klay (Thompson), so they grew organically through trades and also free agency. They used all three areas.”

Riley continued by hinting at his belief that trying to mirror the Warriors in terms of building talent organically through the draft may not work simply because of the time it takes.

“I think today in order to catch them, if you want to do the organic trip, it’s going to take you a long time. Because the organic trip obviously is through lotteries and draft, and maybe some real good trades,” he said. “But to be able to pick off the free agent that can change that organic trip and make it a little faster, I think will always be there.”

Through his words and his actions of trying to sign superstar free agents, like Gordon Hayward this offseason and Kevin Durant last offseason, it is apparent that Riley’s strategy is to build a strong team-oriented unit with the hopes of pushing them over the top once he is able to attract a transcendent talent to Miami.

As history has proven, Riley’s is a difficult strategy to predict. One thing is clear, however, remaining a competitive team and attractive destination for potential stars is a far better strategy than most teams have when it comes to winning championships.
[xyz-ihs snippet=”HN-Native-EndofArticle”]