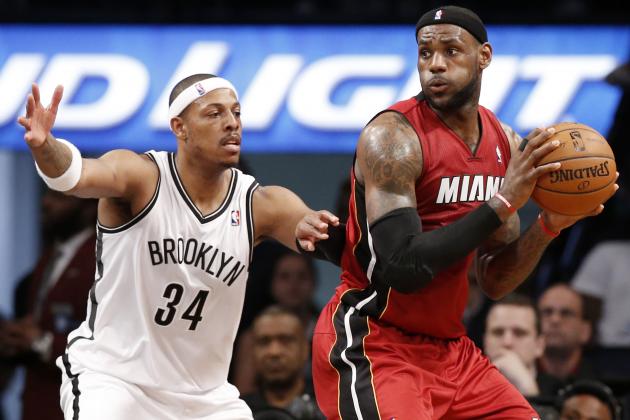 LeBron James is one of the best players of all time. His performance in Game 4 was one of the many highlights of his illustrious career as he matched his playoff career-high of 49 points against the Brooklyn Nets. Now it would be easy to get lost in how amazing LeBron truly is, but his teammates often helped him out too. You don’t get 49 points without a little help from your opponents though and we did see a few errors by Brooklyn, which allowed him a few bonus points. Without further ado, let’s look at some of the keys to LeBron’s night.

Points in the Paint

When LeBron has the ball, you want him to get to the paint.  How do you do this?  The most effective way of doing this is by getting him a mismatch and then opening up driving lanes for him. Here, Wade sets a screen, which forces Livingston to switch onto LeBron, before running to the short corner on the left, thus vacating LeBron’s side of the court. 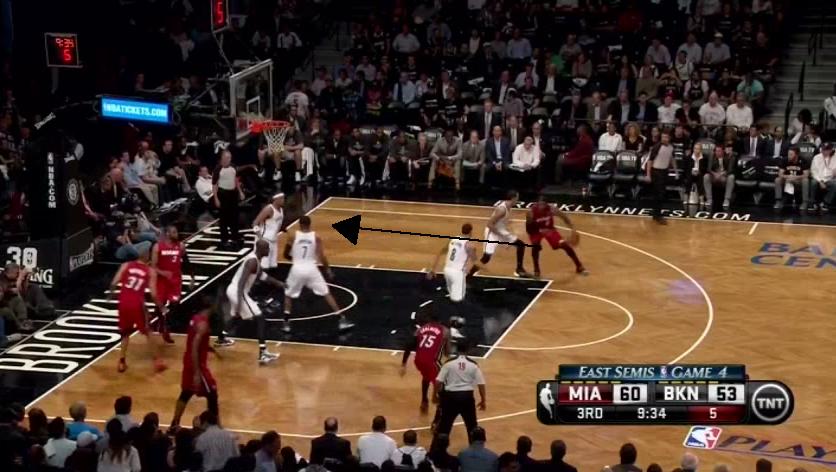 James now has a clear lane to the basket

Chalmers curls around the baseline to receive the ball at the left wing in this inbounds play. Bosh immediately sets a pick for Mario and Garnett is forced to switch onto Chalmers. Chalmers is then able to speed past Garnett, and Pierce decides to come off LeBron to contain Chalmers’ drive. LeBron proceeds to come into the paint for the easy two points.

It may seem like this play was designed to get Chalmers two points, but it wasn’t. The goal was to shift the defense towards the drive and away from LeBron. Note that if Miami wanted to get LeBron a three point opportunity, they would trap Pierce by setting a back screen. This play is sometimes run by Miami and it’s a play popularized by the Spurs called “The Hammer”.

We often saw the same pattern of play by the Heat: cause misdirection on the strong-side and then kick it out to LeBron on the vacated weak-side.

Clips 3 and 4 both show the principle of vacating LeBron’s side of the court, and occupying any potential help defenders if possible.

This next layup happened because Pierce came off of LeBron and hedged. As Miami Heat fans, we all know that there is nothing wrong with hedging; it puts a lot of pressure on the ball handler, which can often force turnovers, and it generally pressures him into making a quick decision.

The problem here is that we see Pierce actually steps up against Chalmers’ left side of his body instead of his right. What difference does it make? Well it means that Livingston is now unable to track Chalmers and he cannot help Pierce cover the passing lanes to LeBron.

James sees this mistake and he immediately slips inside where he can receive the pass and make the easy finish. 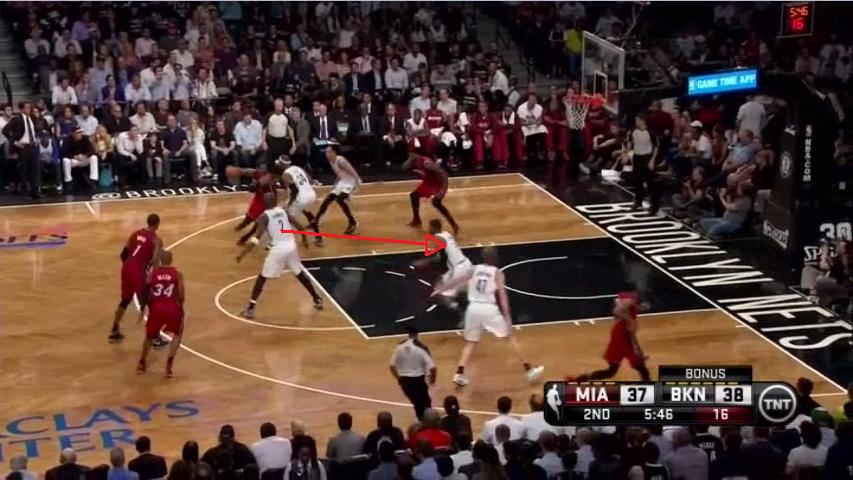 Chalmers now has the easy pass

LeBron’s threes illustrate Brooklyn’s strategy whenever he had the ball: try to prevent any penetration.  This first example shows Pierce backing off and LeBron embarrasses him by making the three.

Here Brooklyn attempted a match-up zone rather than a regular man-to-man defense. The advantages of this type of defense have been much debated, but it basically allows quick switching between the perimeter players whilst also keeping Garnett near the paint. In theory, the quick switching around the perimeter should cover any threes and Garnett should be able to contain any drives. Miami does the right thing by making quick passes and the hybrid zone disintegrates. Teletovic ends up guarding LeBron on the perimeter. We see Teletovic backing off and LeBron simply buries the three.

In my opinion, Teletovic should have recognized the limited time that Miami had, and he should have closed out on LeBron forcing him to drive through what is essentially a hybrid 2-3 zone at this point. Obviously as the defenders would have collapsed on him, LeBron could have kicked it out to the open man and someone could have made a three, but I think you just have to believe that Miami would have been unable to create a high-quality look in such little time.

This next three came from what is commonly referred to as Miami’s “elbow-set” or the “Horns offense”.  Several mistakes happen here though as Bosh delays setting a screen for Jones and when he does actually set the screen, it’s pretty poor. The reason for the delay by Bosh is that Jones fakes cutting to the right wing (which is the most common action in the NBA in this position as it gives a lot of options for quick hits) in order to get rid of Williams. This is a great idea, as long as your teammates know what you’re doing, which clearly isn’t the case here. Jones later makes the deep cut to the left corner. Now Allen didn’t know that Jones wanted to do this and so they are both clumped together (because good spacing is so old-school) and Ray has to explicitly tell Jones to go to the left wing. If Allen had known that Jones was making the deep cut, he would have done the same and the two players would have intersected near the basket. Miami runs this play a lot to get Allen corner threes.

Livingston nearly bails them out by ball-watching, but in the end Wade gives it to James who decides to end our misery by sinking the three. Thanks LeBron! 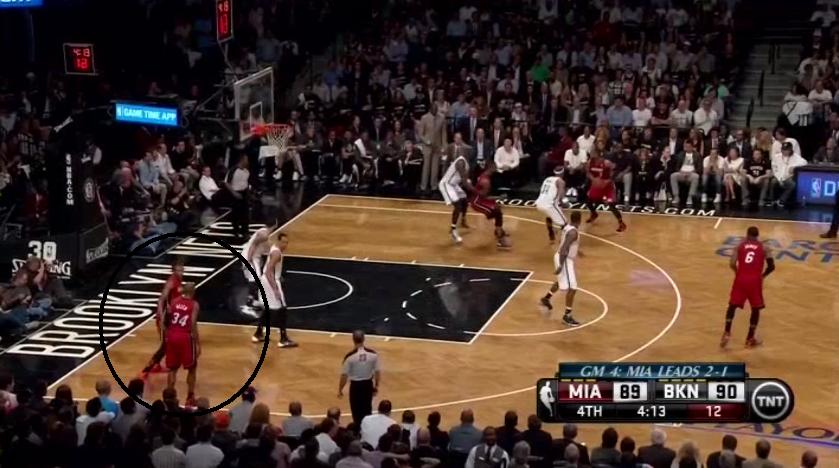 Jones’ confusing routine led to questionable spacing, but at least it made me smile…

Although, James only had two assists, there were many occasions where he was able to read the defense and make the incisive pass. This is the case in the above clip where the Heat run a very popular play which is designed to get a quick hit for Ray Allen. The defense reads the back-door cut, but LeBron quickly anticipates Wade’s own cut on the left side and he makes the pass. This all happened because LeBron noticed that Livingston was sleeping.

Which two spots along the perimeter can James pass to easily? The top of the key and the left wing.

Those two spots are the danger zones, and if any Miami player arrives there in space, each Brooklyn player will simultaneously be struck with a panic-attack.  So how does Miami exploit these “danger zones”?

Jones curls around a Bosh screen (Note: that he does this a bit too early and so he doesn’t get a more effective staggered screen from Chalmers and Bosh) and goes to the left wing. Jones was just a decoy and we now see Allen curling around a staggered screen from Chalmers and Bosh. The trailing Williams has had to cover a lot of ground by trying to go over the two screens. Garnett instantly appreciates Williams’ plight and so he decides to cover Allen in the hope of deterring any three-point attempts from Ray (rumor has it that he is actually not bad at shooting threes). LeBron immediately notices this and he makes the deadly bounce pass to Bosh. 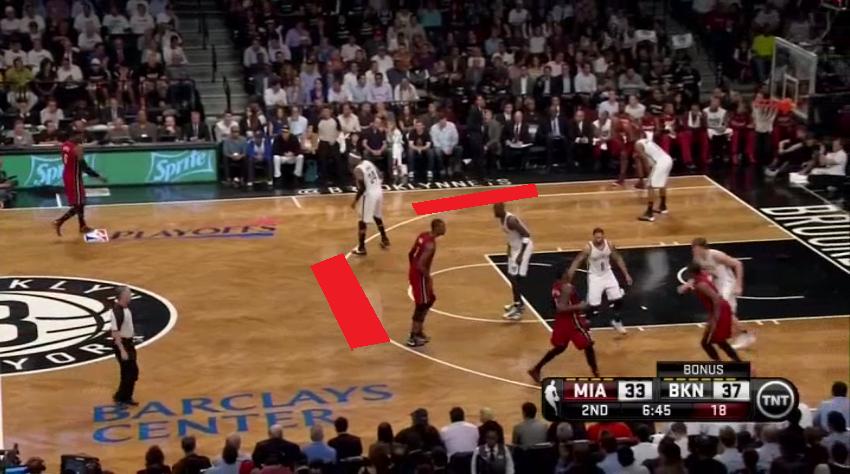 This skip pass is just astounding. No words…

LeBron had another terrific night as a Miami Heat player and you can’t help but feel that these are ominous signs for him as we are probably approaching a rematch of last year’s Eastern Conference Finals. A strong argument could be made that the Miami Heat are not playing at the same level as they were last season, but when James plays this well, the Heat understand what to do and it works.

49 pointsbreakdownlebronlebron analysisplay-by-play
← Previous Story Heat Nation Breakdown: How Did Brooklyn Get So Many Open Threes?
Next Story → Heat Nation’s Top Moments From Round 2