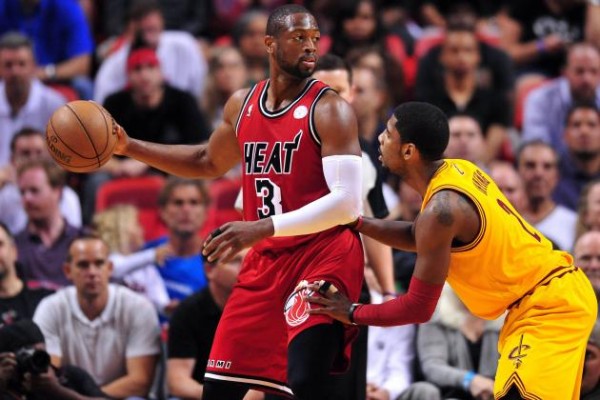 Dwyane Wade is not the only guard in these NBA Playoffs lighting a fire right now. Kyrie Irving of the Cleveland Cavaliers has been putting on a clinic for the Cavs, who are patiently awaiting their opponent for the NBA Eastern Conference Finals.

Irving is averaging 24.4 points per game in the playoffs right now. Meanwhile, Wade is stepping it up with an average of 22.0 points per game. While both players are scoring and playing well throughout their respective playoff stints, it would seem they have more in common than just numbers. At least, that’s what LeBron James thinks.

In a recent comment made by James to Cleveland.com reporter Joe Vardon, the “King” actually claims Irving has reminded him of Wade throughout these 2015-16 playoffs.

Here’s what he had to say when asked about it:

“I mean, they’re both special in their own right,” James said of Irving and Wade. “Obviously Wade is a little older and has experienced a little bit more but as far as the fourth quarter, they both thrive on that in their life,” James said. “They love the pressure situation and are not afraid to take the shot or if they miss a shot they’re not afraid to take the blame either. So I’ve been fortunate to play with two great guys.”

James is certainly right about one thing; Wade does thrive in clutch fourth-quarter situations. In clutch situations, or when the game is within five points over the final five minutes, Wade leads the NBA, averaging 6.7 points in such situations in this year’s playoffs.

The comment from James comes as high praise for the 24-year-old Irving, but the praise is well warranted. He is also taking over in late-game situations. The former University of Duke product is averaging 6.4 points in the fourth quarter during these playoffs, while Wade is averaging 6.3 fourth-quarter points.

It will no doubt be entertaining if these two teams go head-to-head in the Eastern Conference finals this year. Right now the Miami Heat are tied 2-2 with the Toronto Raptors in their East semifinals series. If Miami can pull off the series win, it will certainly make fans across the NBA ecstatic to see the matchup they’ve all been waiting for.

Another thing that’s interesting about James’ recent comments, is that he still seems to be playing the “nice guy” game when it comes to Wade. He has already claimed he’d love to meet Wade in the Eastern Conference finals and has a noted history of holding a soft spot for his best friend and former teammate. Will he be able to temporarily throw that aside if the teams do indeed meet in the next round? That remains to be seen. For now, all we can do is sit back and watch how it all plays out.
[xyz-ihs snippet=”Responsive-Ad”]