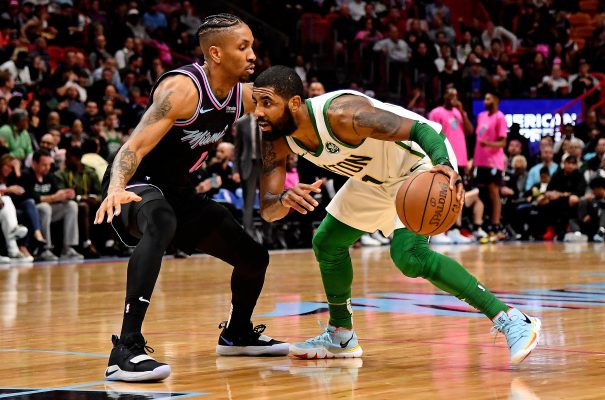 After the Miami Heat’s 115-99 win over the Boston Celtics on Thursday night, Celtics point guard Kyrie Irving “raved” about multiple Heat players and the style the team uses during games.

Kyrie raved about a whole slew of Heat players after the game, and the style they utilize.

Irving and Winslow, both of whom are Duke University products, exchanged jerseys after the game.

Miami’s stingy defense, which allows the fifth least amount of points per game in the league, was on full display against Boston as it held the Celtics to 40.4 percent shooting from the field. Although Irving scored 22 points on 10-of-19 shooting, the rest of the Celtics combined to shoot 37.1 percent from the field.

This praise for the Heat could be a potential sign of interest from Irving, who could be a free agent after this season if he declines his player option.

The 26-year-old and the Heat have been linked multiple times before. Irving named Miami as one of his preferred trade destinations back in the summer of 2017, when he was still a member of the Cleveland Cavaliers. Miami is also reportedly of “legitimate consideration” for the former first overall pick should he choose to become a free agent this offseason.

If the Heat are able to somehow land Irving, it would vault them right back up to the top tier of the Eastern Conference and put them in title contention once again.
[xyz-ihs snippet=”HN-300×250-TextnImage”]