Report: Miami Heat Will Be ‘Legitimate Consideration’ for Kyrie Irving in 2019 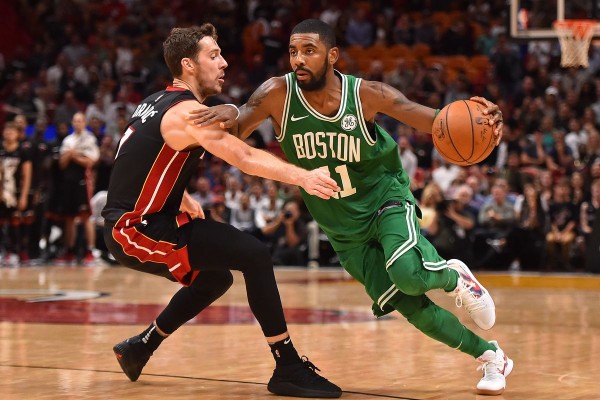 Kyrie Irving was the talk of the NBA late last summer after the All-Star point guard demanded a trade from the Cleveland Cavaliers. Shortly after he made his trade demand, it was revealed that the Miami Heat were on his short list of teams he would have like to have been traded to. Ultimately, Irving was sent to the Boston Celtics, but that doesn’t mean our chances of seeing Irving play in Miami is over.

According to Barry Jackson of the Miami Herald, the Heat will likely be very much in the mix next summer when Irving becomes a free agent:

“Unless he falls in love with Boston, Miami would be a legitimate consideration for Irving, who listed the Heat among four preferences when he asked the Cavs to trade him last summer,” Jackson wrote. “But if [Hassan] Whiteside or [Goran] Dragic does not opt out, landing Irving would be very difficult, because a sign and trade would be needed. There has been animosity in the past between the Heat’s Pat Riley and Boston’s Danny Ainge, though there is great respect between Riley and Stevens.”

The Heat have not enjoyed the services of a true superstar at the height of their powers since LeBron James left for Cleveland back in 2014. There’s no denying that there would be a sort of poetic justice to Irving deciding to sign with the Heat, following in his former teammate’s foot steps.

There is much basketball to be played between now and the 2019 offseason, but there’s no reason not to get excited about possibly bringing a player as talented as Irving to South Florida.

Until then, the Heat will have to prepare to play against Irving in the event that they face off against the Celtics in the 2019 Eastern Conference playoffs.
[xyz-ihs snippet=”HN-300×250-TextnImage”]