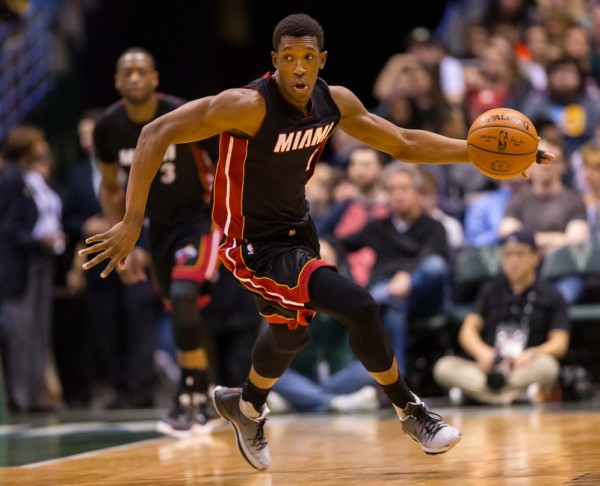 In the second quarter of the Miami Heat’s home game against the Cleveland Cavaliers on Saturday night, shooting guard Josh Richardson came away with what might’ve been the defensive play of the game.

As Cavs small forward Richard Jefferson cut backdoor for a reverse layup, a trailing Richardson tracked down the layup, blocked it, and kept the ball in play, tapping it to teammate Wayne Ellington.

“I’m starting to trust my legs more,” Richardson said. “I think that was a lot of it, I wasn’t really trying to do a lot. (Saturday) I was trying to block shots and I felt like I was jumping well. I’m just trying to get back to where I was at.”

Richardson most recently missed 19 games due to a foot injury, struggling to find his groove in limited minutes in his return.

Since returning, the 23-year-old is shooting just 33 percent from the field and 18 percent from three-point range. Yet, the shooting guard is slowly, but surely making progress, as he dropped eight points, seven rebounds and three assists on Saturday against the Cavs.

Heat head coach Erik Spoelstra doesn’t seem phased by Richardson’s lack of offensive consistency, however, instead pointing to contributions that don’t always show up in the box score.

“I tell him every single day, I don’t care about the offense,” Spoelstra said. “Get us organized, which he does a terrific job of, getting us into our sets, getting the ball where it needs to go. Continue to space the floor, that will get better.

“But it’s the defensive activity, energy, versatility that he brings. He’s guarding one through three, one through four (Saturday), but you noticed him. That’s not just the stats. An average person watching would say, ‘Who’s that guy? He’s making plays defensively, he’s around the ball at time.’

“I’m encouraged by his activity level now. It’s probably getting closer to where it was last year.”