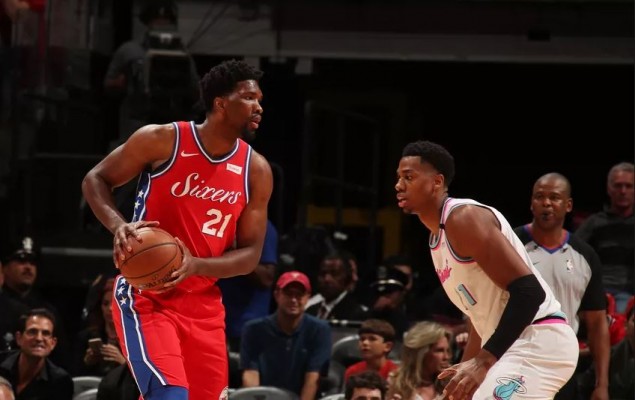 Speaking to reporters after practice Wednesday, Miami Heat center Hassan Whiteside said that he would be ready for a matchup against Joel Embiid if it were to happen this series.

“I’m ready for any oppponent,” said Whiteside. “Every day I come in and I prepare. I’m one of the better defenders in the league, so I like to take pride in my defense.”

Embiid has missed the first two games of the series because of an eye injury and has been listed as doubtful for Thursday night’s Game 3 (7:00 p.m. ET on TNT) in Miami.

Whiteside has only played a total of 27 minutes in the series and much of that can be attributed to Embiid’s absence. The Philadelphia 76ers play at a much faster pace without the Cameroonian, something that doesn’t suit Whiteside’s style.

The two have a well-documented rivalry that began after a preseason game when they both called each other out on Twitter. Later on, in March, Embiid called Whiteside “soft” and “dirty.” Whiteside responded by saying that in 2018, when Embiid talked, he wouldn’t talk.

Having stolen a game in Philadelphia, the Heat will now look to take advantage of the two games they have at home, where during the regular season they were 26-15.
[xyz-ihs snippet=”HN-300×250-TextnImage”]