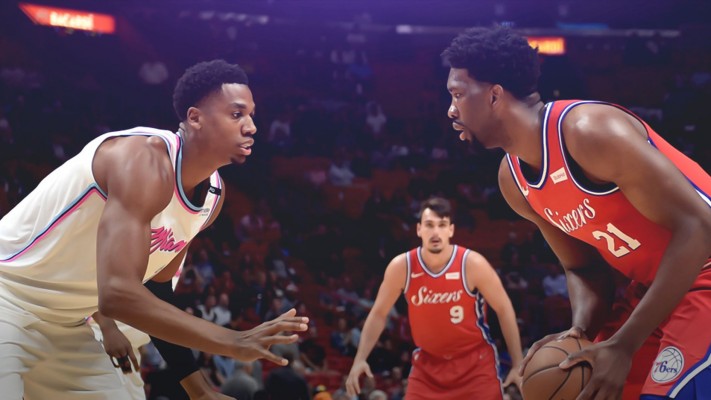 Hassan Whiteside put an exclamation point on the most recent chapter regarding his and Joel Embiid’s rivalry when the Miami Heat defeated the Philadelphia 76ers on Thursday night.

Not only did the Heat get the win, Whiteside bested Embiid on the stat sheet and made him the victim of a highlight reel dunk in the fourth quarter.

Following the game, Embiid did one of the things he does best off of the basketball court and talked quite a bit of trash regarding Whiteside’s style of play.

“I didn’t touch him,” Embiid said according to NBC Sports’ John Clark. “He tried to hit me in the back, which is kinda dirty. I wont forget about that.

“He was soft. He’s really soft. I didn’t feel anything. … I think he’s pretty messed up. … You gotta play basketball.”

Joel Embiid said Whiteside’s forearm to his back Thursday was a ‘dirty’ play. Here is the Heat center’s response pic.twitter.com/v343vNsI0r

After losing the first two matchups against the 76ers this season, the Heat have managed to win the last two to tie the season series at 2-2. In those two victories, Whiteside played incredibly well, averaging 20.5 points, 9.5 rebounds, and 2.5 blocks per game.

As the Heat continue to try to climb the rungs of the Eastern Conference standings leading up to the playoffs, it’s clear that Whiteside plans to let his play do the talking. For Miami, there couldn’t be better news.
[xyz-ihs snippet=”HN-300×250-TextnImage”]