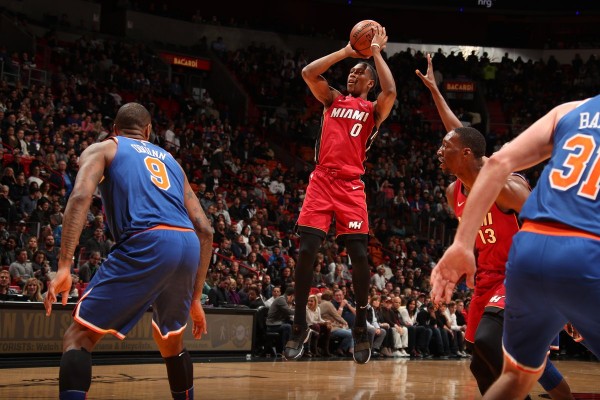 (Miami, FL) – The last time the Miami Heat faced off against the New York Knicks, they suffered their biggest loss of the season, 115-86. When the Knicks came to Miami for a rematch, however, the home team was determined to even the score.

With 29 lead changes and 26 ties, the game felt like a playoff matchup from start to finish. Neither team managed to claim victory by the end of regulation and it took the Heat one overtime period to finally get the win, 107-103.

“I love the fact that we found a way to win in an overtime game that could have been emotionally draining,” Heat head coach Erik Speolstra said following the game. “To win a game at home shooting 40 percent, wasn’t particularly smooth at all times, but you just got to find a way.”

With 13 seconds left in regulation, Miami was up three points, 97-94, and American Airlines Arena was ready to celebrate the home team’s second victory of the new year. The celebration was put on pause, however, when Knicks forward Doug McDermott hoisted a 3-pointer with one second left in the game. His shot miraculously went in and after four hard-fought quarters, both teams geared up for a five-minute sprint to the finish line.

The clutch three by Doug McDermott to send the game to OT!#Knicks pic.twitter.com/AjVAnGFjHF

Former Heat first-round draft pick Michael Beasley started the Knicks off on the right foot when he hit a jumper less than a minute into the overtime period. He unfortunately injured his ankle following the shot, but he had already made a huge mark on the game, finishing with 20 points and 10 rebounds in just 23 minutes of play.

Down two points, Miami had to make a move. It did just that when Goran Dragic, who finished with 19 points and six rebounds, hit a deep three to give Miami a one-point lead.

Both squads clamped up defensively on the following four possessions and neither team scored a point until nearly a minute and a half later when Knicks big man Kristaps Porzingis was sent to the line with 2:45 left in the game. He hit both free-throw shots and gave New York a 101-100 lead.

Just as he had all night, Wayne Ellington came through in the clutch on Miami’s following possession when he launched a 3-pointer to give his squad a two-point lead with 2:22 left in the game. Ellington finished the game as Miami’s scoring leader with 24 points on 6-of-16 shooting from beyond the arc. He added two clutch offensive rebounds earlier in the contest to keep the score close down the stretch.

“It just shows how competitive we are,” Ellington said following the victory. “These games are fun, these are ones that you really have to dig in and everybody has gotta be locked in and it takes a total team effort. This one right here shows character.”

The Knicks tied the game up, 103-103, on their next offensive possession, but when Josh Richardson, who finished the night with 18 points, three steals, and two assists, was fouled on his way to the basket with 25 seconds left, the Miami faithful could begin to sense the victory.

The Knicks had one more chance to tie or take the lead, but with 13 seconds left on the clock, Jarrett Jack missed a jumper. While the call on the subsequent rebound was initially a jump ball, a review determined that Beasley had tipped the ball out and the possession arrow swung in Miami’s favor.

Miami inbounded the ball to James Johnson, who was fouled before hitting both shots from the line to solidify the thrilling victory.

Friday night’s game was yet another team victory for a Heat team who have quietly snuck into fifth place in the Eastern Conference. Six players finished the night with double-digit scoring performances. Hassan Whiteside put in another solid game since returning from his knee injury with 12 points, seven rebounds, and two blocks. Tyler Johnson also played well, adding 18 points, four assists, and four steals, and Kelly Olynyk recorded his second double-double in a row with 10 points and 10 rebounds.

Another positive takeaway from Friday’s game was that it finally gave the Heat a winning record when playing at home. While they struggled mightily in front of their own fans early in the 2017-18 campaign, their recent success has given them a 10-9 record on the season.

The Heat will enjoy one day’s rest before they host the Utah Jazz. They will look to add to an already incredibly successful last month of play in which they have won 10 of 15 games. With the way things are clicking right now, anything but a victory would be something of a surprise.
[xyz-ihs snippet=”Responsive-ImagenText”]