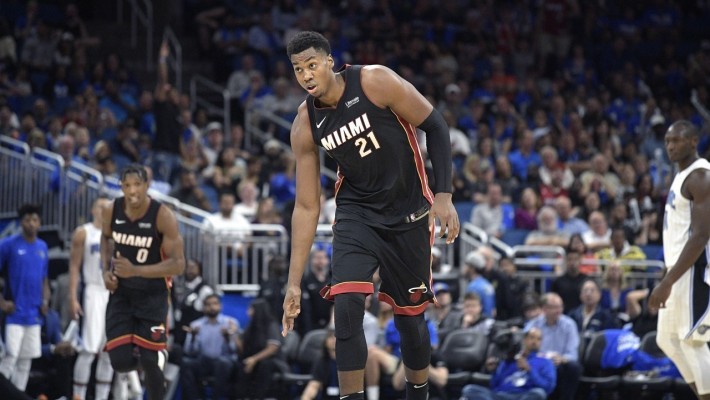 After 13 games and nearly a month of sitting out, Miami Heat center Hasssan Whiteside is expected to take the court on Tuesday night versus the Orlando Magic.

Whiteside has been rehabbing a bone bruise in his left knee since a Nov. 29 matchup against the New York Knicks, but according to the Sun Sentinel‘s Ira Winderman, he will “warm up with the intent to play.”

The Heat went 7-6 in Whiteside’s absence, but have managed to win four of their last six matchups. As he recovered, Kelly Olynyk and rookie center Bam Adebayo took over the majority of the team’s big man duties. While Adebayo has stated multiple times that he will accept whatever new role he is given upon Whiteside’s return, it will be interesting to see how Heat head coach Erik Spoelstra works Whiteside back into the lineup.

While the shot-blocking big man looks to be making his return to the lineup, fellow Heat players James Johnson, Justise Winslow, and Dion Waiters are still out with lingering injuries. Johnson has missed the least three games due to ankle bursitis, Winslow has missed the last six contests with a bruised knee, and Waiters is dealing with yet another sprain to his left ankle.

With Miami’s three starting-caliber players still out due to injury, Whiteside’s return is crucial if the Heat plan on continuing their recent success. No one can expect Whiteside to immediately imitate the production he was enjoying before he injured his knee, when he was averaging 14.9 points and 12.7 rebounds per game, but there is no doubt that his presence will help the Heat on both ends of the court.

Miami has weathered a string of injuries that would derail any team in the NBA, but it seems that it may be returning to full strength in the relatively near future. Despite their underwhelming record of 17-16, the Heat are just one spot out of a playoff position in the Eastern Conference and are tied for the lead in the Southeast Division. Once back at full strength, the Heat will surely look to make a run leading up to the All-Star break to put themselves in even better position to end their playoff drought.

When healthy, Whiteside is perhaps the Heat’s most important player. While Spoelstra is sure to ease him back into the starting lineup, his return could be the exact kind of Christmas gift Miami needs to take its success this season to the next level.
[xyz-ihs snippet=”HN-300×250-TextnImage”]