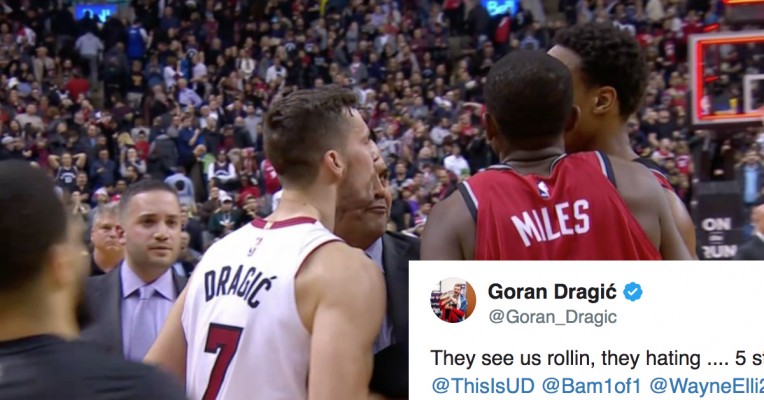 The contentious nature of the Miami Heat‘s clutch 90-89 road victory over the Toronto Raptors on Tuesday night was undoubtedly still lingering when it came to Heat point guard Goran Dragic. That’s because he took to social media following the contest to offer a defiant message to any detractors who may be unimpressed by the Heat’s current five-game winning streak.

Dragic and the Raptors’ DeMar DeRozan had engaged in a heated dispute in the immediate aftermath of the game that was won on a Wayne Ellington layup with less than a second remaining. DeRozan took exception to Dragic’s defense on a desperation toss and ultimately took a swing at the guard that missed its intended target.

The game was marked by another major incident, leading to the ejection of James Johnson during the third quarter. That followed a scuffle with the Raptors’ Serge Ibaka, who was also tossed by game officials. The victory allowed the Heat to move into a first-place tie in the NBA’s Southeast Division with the Washington Wizards.

The Heat will seek to boost its streak to six on Wednesday night when they stay on the road to face the Indiana Pacers. Tipoff for that game will be just after 7 p.m. ET, with Miami then off until Sunday afternoon, when they return home for an afternoon clash against the Milwaukee Bucks.
[xyz-ihs snippet=”HN-300×250-TextnImage”]