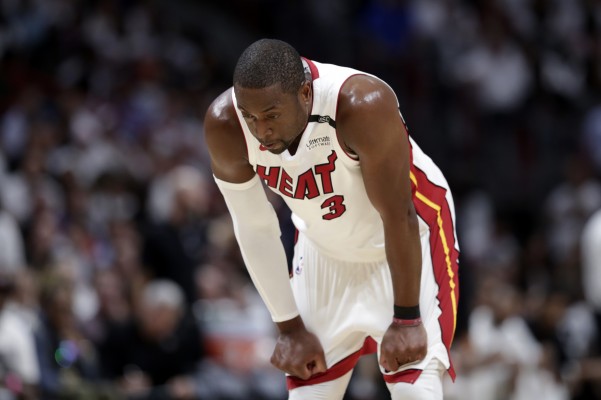 The Miami Heat lost Game 4 to the Philadelphia 76ers in heartbreaking fashion on Saturday night. The 106-102 loss came despite another strong playoff performance by Dwyane Wade.

Now, with the Heat on the brink of playoff elimination, there’s a distinct possibility that the Miami faithful are also on the brink of seeing Wade’s final game in the NBA.

Following the game, Wade was asked whether or not Game 4 could have been his final game at American Airlines Arena.

Wade declined to address whether this could have been his final game at AmericanAirlines Arena in a Miami Heat uniform. But he smiled a possibly telling smile.

Back in February, Wade admitted that he will likely weigh whether or not he wants to continue his NBA career this offseason. At the time, it seemed quite possible that Wade would retire this offseason. However, after enjoying something of a resurgence in Miami, it seems that Wade has rediscovered his love for basketball. Still, his future is very much up in the air.

Despite being down three games to one against the 76ers, Wade has had two truly impressive games and is averaging 18.0 points, 4.0 rebounds, and 3.3 assists per game in the series. If the Heat had managed to hold on and win on Saturday, it would have been thanks much in part to Wade’s heroics. He scored 12 points in the final frame and finished with a game-high 25 points.

Now the series will head back to Philadelphia, where the surging 76ers can end the series with a win on Tuesday. Hopefully, Miami is able to get the win in Game 5 so that fans get one more chance to cheer Wade on at home before the uncertainty of the offseason begins.
[xyz-ihs snippet=”HN-300×250-TextnImage”]