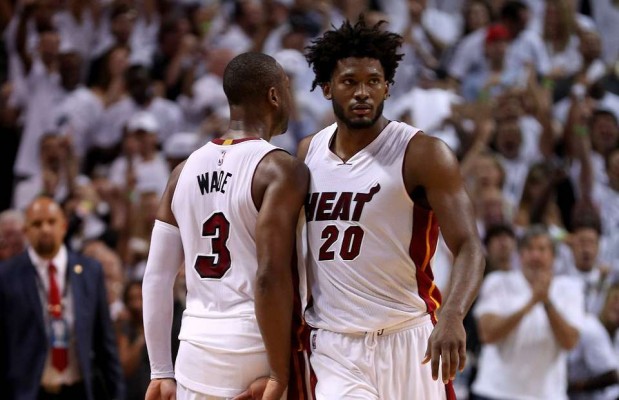 Miami Heat forward Justise Winslow has been playing some of the best basketball of his young career as of late. After missing nearly a month of the season due to injury, he battled back to get into the rotation and now his hard work is starting to attract attention.

Following a big win over the Philadelphia 76ers on Thursday night, Dwyane Wade recognized Winslow as a teammate and as a friend in a heartfelt Instagram post.

I left my little bro a year and a half ago and neither of us was ourselves but we back at it. Love this kid. Keep shining little bro @iamjustise #family #Rook1

Wade and Winslow only played for one season together before the three-time NBA champ decided to sign with the Chicago Bulls in the 2016 offseason. It’s clear, however, that they developed quite a strong bond during their short time together.

Winslow’s 2017-18 season got off to a rocky start, but he has recently been showing strong signs of improvement. The former 10th overall draft pick had averaged just 5.9 points and 5.0 rebounds in the month of February. So far this month, he is averaging an impressive 14.3 points and 6.8 rebounds per game. He has also seen a large uptick in his playing time, averaging nearly 10 more minutes per game so far in March compared to the previous month.

While there is no clear connection between Wade rejoining the Heat and Winslow’s improvement, having a veteran presence like Wade back in the organization can certainly only help.