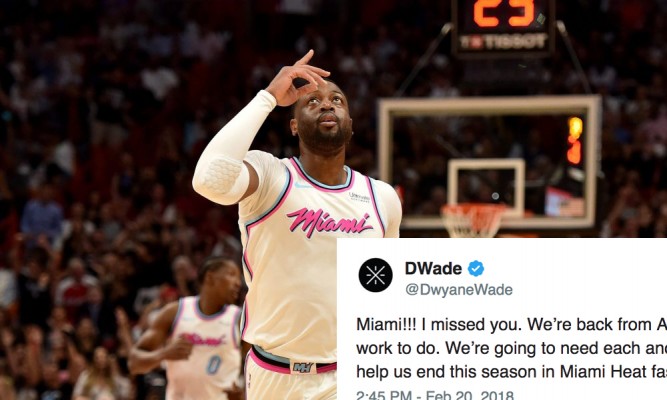 Veteran Miami Heat guard Dwyane Wade spent the first 13 seasons of his NBA career with the Heat, exuding the sort of leadership that played a key part in helping the franchise capture three NBA titles. After returning to the team in a Feb. 8 trade, it’s apparent that Wade is ready to again offer that same level of support in the final two months of the regular season.

Miami!!! I missed you. We’re back from AllStar and we have a lot of work to do. We’re going to need each and every last one of you to help us end this season in Miami Heat fashion! Let’s go HeatNation

The Heat struggled in the weeks leading up to the All-Star break, losing seven of their last eight games. Their last defeat was a crushing one as they watched a 24-point third-quarter lead completely disappear in a Feb. 14 road loss to the Philadelphia 76ers.

Wade had tasted victory in his return to Miami in a Feb. 9 home win against Milwaukee, but then watched the team lose a pair of close contests, including the Philly disaster. In those three matchups, he averaged 7.0 points and 5.3 rebounds.

During the summer of 2016, Wade left to sign a two-year contract with the Chicago Bulls, returning to his hometown. After the Bulls began a rebuilding program last year, he asked for a buyout of the remaining year of that deal. When that was agreed upon, he signed with the Cleveland Cavaliers, joining his close friend and former Heat teammate, LeBron James. However, when informed two weeks ago that his playing time would diminish, he agreed to a deal that sent him back to the Heat.

Miami returns to action on Friday night when it travels to face the New Orleans Pelicans in a game that will tip off just after 8 p.m. ET. It quickly returns back home to face the Memphis Grizzlies on Saturday night.
[xyz-ihs snippet=”HN-300×250-TextnImage”]