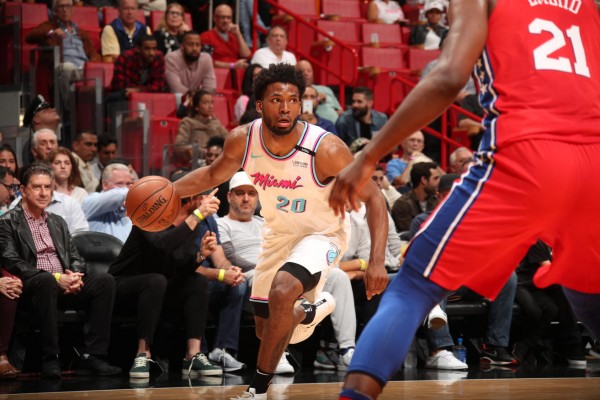 (Miami, FL) — Combining lockdown defense with dead-eye shooting from the field in the fourth quarter helped the Miami Heat put away the Philadelphia 76ers, 108-99, at American Airlines Arena on Thursday night. The victory marks the Heat’s sixth win in their last seven contests at home.

In that final period, the Heat clamped down on the 76ers, limiting them to just a 32 percent success rate (7-of-22) from the field. Conversely, the Heat offense managed to connect on 72 percent (13-of-18) of their field-goal attempts to aid in opening up some breathing room in what had been a tightly contested game.

The Heat entered that fourth quarter trailing by a point, but used a 19-7 push to take a 92-81 lead with 4:49 to go. They managed to maintain that 11-point lead with just over two minutes remaining, but Philadelphia made things interesting by scoring five unanswered points in 37 seconds to make it 101-96 in favor of Miami with 1:24 left. Two free throws and a Dwyane Wade dunk ultimately clinched the contest.

“Our guys understood what this game meant,” Heat head coach Erik Spoelstra said when asked if he challenged his team when they were trailing. “It would be a disservice to the guys in the other locker room. If we played 100 times, how is that series going to come out? Who knows? This game could have been a two, three-point game.”

Hassan Whiteside led all scorers with 26 and also snagged eight rebounds, while swatting away a pair of shots by the 76ers. Perhaps most importantly, his defense against Philly center Joel Embiid helped negate the latter’s important presence in the 76ers lineup as Embiid managed to hit on just 5-of-18 from the field.

Others reaching double-figures in scoring for Miami included Wade with 16 points and six boards off the bench, Josh Richardson with 13, Tyler Johnson with 12 and Kelly Olynyk with 10 on the night.

The opening quarter saw the Heat have early control, holding as much as a seven-point lead four minutes into the game. However, over the remainder of the period, the Sixers managed to chip away at that deficit and even took their second brief lead of the quarter. Miami would hold a slim 29-28 advantage when the quarter ended.

The Heat then applied a good measure of defense for the first 10 minutes of the second period, holding the 76ers to just 26 percent (5-of-19) from the field. That played a key role in forging a 17-6 Heat run that gave them their largest lead of the half at 49-37. The late momentum shifted with the score at 51-40 when Philly knocked down a trio of unanswered 3-pointers to chop the margin to just two points. Wade’s fadeaway with one second left then doubled that Heat lead to four at 53-49.

“What we could not do for most of the night was contain them in transition,” Spoelstra said. “They’re fast, they have shooting, they find the open guy. We didn’t match up well with them in the open court and they really made us pay for that.”

That 9-2 surge for the Sixers that closed the half continued during the first seven minutes after the break as the Sixers outscored the Heat 21-12 to hold a 70-65 advantage. Miami used those final minutes of the period to exchange leads before heading into the fourth trailing by a 73-72 score. The Heat’s main problem in the quarter was their simple inability to put the ball in the basket, shooting just 33 percent (7 of-21) from the field.

The Heat stays at home for their next matchup, which will be Saturday night against the Washington Wizards. That game tips off just after 7:30 p.m. ET. Next Monday night, Miami begins a brief three-game Western road swing.
[xyz-ihs snippet=”HN-300×250-TextnImage”]