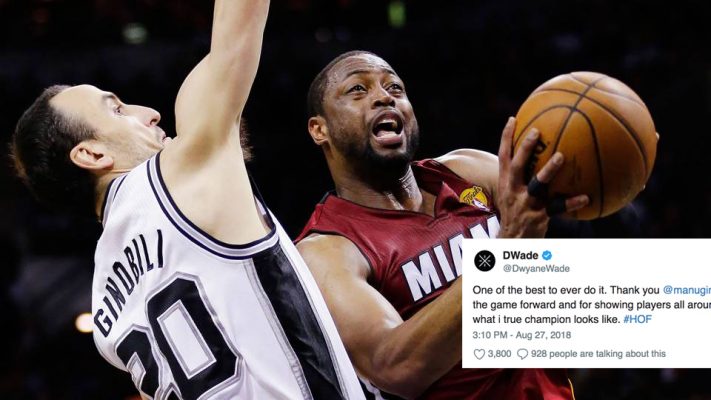 Miami Heat legend Dwyane Wade may be mulling over his own retirement this summer, but on Monday morning, fellow NBA star Manu Ginobili officially closed the book on his own NBA career.

Ginobili has been a fixture in the NBA for the better part of the last two decades. To honor his impact on the league, Wade took to Twitter to post a heartfelt message to the San Antonio Spurs star.

One of the best to ever do it. Thank you @manuginobili for pushing the game forward and for showing players all around the world what i true champion looks like. #HOF

Through his post, it is clear that Wade respects Ginobili as much as any other player he has faced off against during his career, and there is good reason why. Wade is very familiar with just how great Ginobili was during his NBA career.

In the 2013 and 2014 NBA seasons, the Heat and Spurs faced off in the NBA Finals. While the Heat were able to win the first matchup in an epic seven-game series, the Spurs dominated the 2014 series on their way to a 4-1 series victory. Both Wade and Ginobili were considered two of the most skilled shooting guards in the league during those two seasons, and their matchups in those Finals series were truly something to behold.

Ginobili’s departure from the NBA marks the end of an era in San Antonio. Along with Ginobili, Tim Duncan, and Tony Parker, the Spurs won four NBA championships within 11 seasons. Now, all three players are either retired, or playing elsewhere.

Hopefully Wade does not decide to follow Ginobili’s lead and hang it up for good this summer. If he does, it would not be a surprise to see the Argentine native take to social media and return the favor by honoring Wade’s incredible career as well.
[xyz-ihs snippet=”HN-300×250-TextnImage”]