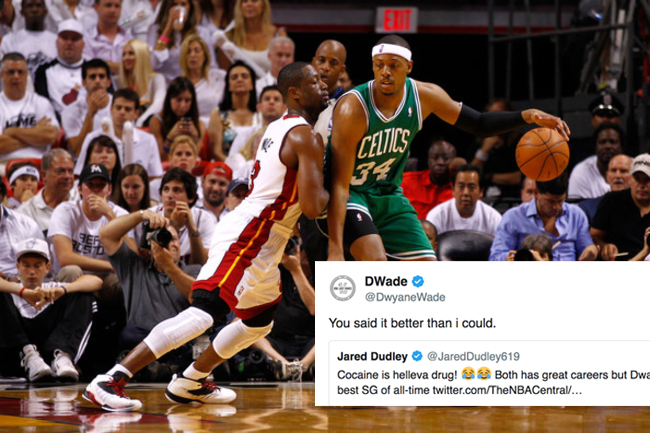 After the Heat lost in Minnesota to the Timberwolves on Friday night, Wade responded to Pierce’s comments on Twitter. Hilariously enough, Wade was actually responding to fellow NBA star Jared Dudley.

You said it better than i could. https://t.co/5LhKnHW9xX

Wade and Pierce played each other a total of 55 times in the NBA, with 33 of those games coming during the regular season and the remaining 22 coming in the playoffs. Although Pierce won 22 of the 33 regular-season matchups, Wade won 13 of the 22 playoff battles.

The Marquette University product is currently in the final season of his illustrious career and has received a warm reception from nearly all NBA teams, something Pierce never got in his final season. This season, Wade is averaging 14.6 points, 3.9 rebounds and 4.1 assists per game.

Wade’s career is slowly coming to a close and could end up with him missing the playoffs as the Heat currently sit in ninth place in the Eastern Conference, one game back of the Detroit Pistons.

The Heat have three games remaining in the regular season as they will travel to Toronto to play the Raptors on Sunday. They will return home to Miami to play the Philadelphia 76ers on Tuesday, where Wade will be honored pregame, and then they will finish the season off in Brooklyn against the Nets on Wednesday.
[xyz-ihs snippet=”HN-300×250-TextnImage”]