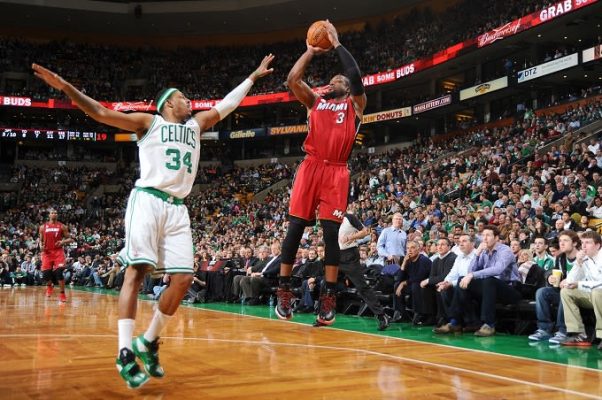 Wade’s response came after a commenter stated that Pierce was the better player.

We both had amazing careers. I’ll be clapping when he goes into the HOF! It’s well deserved. https://t.co/CoE45elC9O

The rivalry that thrived between Wade and Pierce when the two faced each other on the court erupted again just as Wade’s career was ending last month. Pierce commented on ESPN that he was the better player, which sparked criticism that included rebukes from both Wade’s wife and son.

Both Wade and Pierce had lengthy NBA careers, though Wade’s overall numbers were slightly better when he walked off the court for the final time.

Wade also held an edge in NBA titles, having been a part of all three of the Heat’s league championships and was Finals MVP in 2006. In contrast, Pierce was only part of one Celtics championship during his 15 years with the team, though he was also named Finals MVP when his team won in 2008.

That comparison of championships also served as a source of aggravation for Pierce, who stated that Wade’s titles largely came because of the quality of his teammates, most notably LeBron James, Chris Bosh and Shaquille O’Neal. However, Pierce’s title in Boston only came after the team acquired stars Kevin Garnett and Ray Allen.

While Wade has done his part in attempting to put an end to this controversy, the true test will be whether or not Pierce issues a similar statement.

There’s no guarantee that such an event will happen, but Wade’s first step exudes the class he exhibited during his legendary career.
[xyz-ihs snippet=”HN-300×250-TextnImage”]