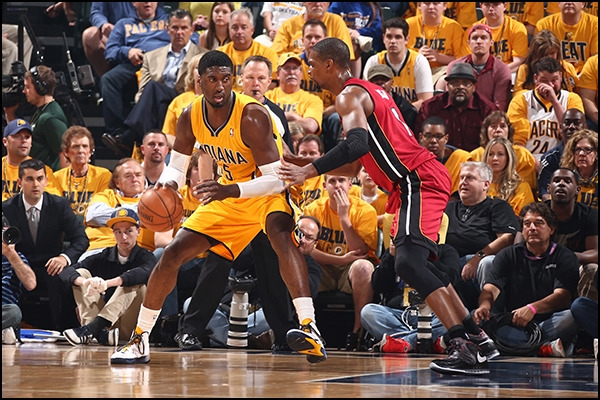 The Indiana Pacers were able to brush aside our beloved Miami Heat on Sunday with a 107-98 win to claim the first win of this much-anticipated series. I think most people were very shocked with the ease with which the Pacers won. So what happened?
Let’s look at where Miami went wrong on defense.

The Heat Allow Cuts to the Basket

Although Indiana has experimented with a motion offense and even some flex plays, its offense is quite simple. The only way Indiana will ever be able to get open threes is by penetration and a kick-out.

Time and time again, the Pacers were able to cut into the lane after a defensive error by the Miami Heat.

We now see Wade committing such an error. He anticipates the screen from Scola and so he cheats by shifting to his left early to be able to fight over Scola’s screen in time to prevent any Stephenson penetration. This gives up a driving lane through the middle which Stephenson quickly takes. In the end Stephenson finishes over Anderson, but he could’ve easily kicked it out to Watson who has an open look . 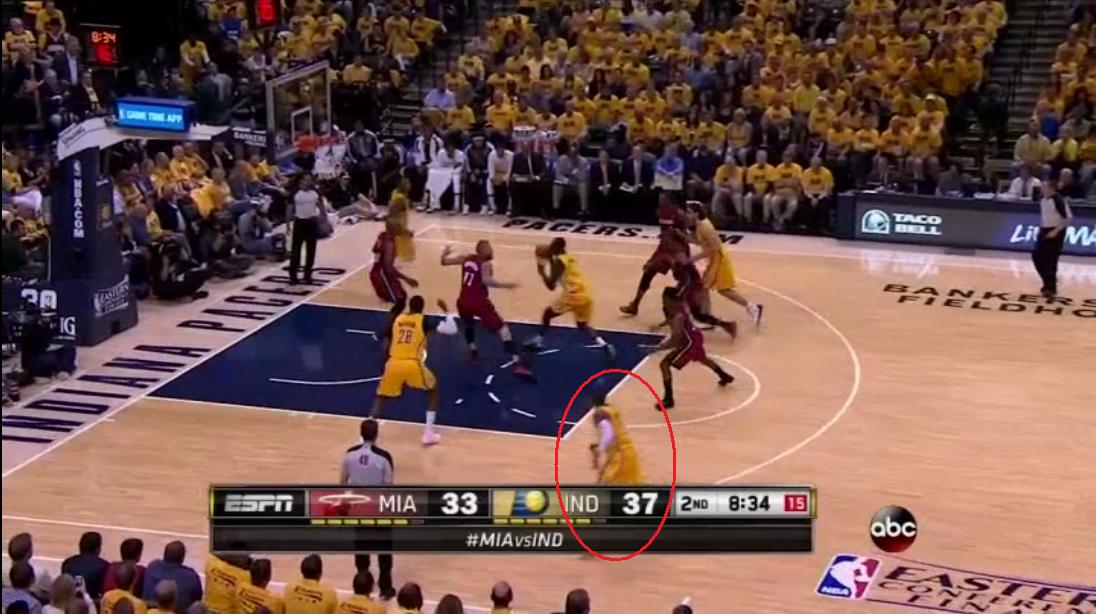 Again Stephenson can easily penetrate as Bosh and Wade cheat off a screen and they give up a drive through the middle.

1. Stay tight on Scola and hope that an open Stephenson drive can be defended.
2. Work with Wade to corral Stepheson along the baseline. Bosh stays in front and cuts the lane to the basket whilst Wade is slightly behind Stephenson to apply more defensive pressure whilst also covering the passing lane to Scola.

99.99% of players pick option 2. Bosh chooses to do neither, and he gets stuck in no man’s land. Stephenson can penetrate, or he can kick it to the open Scola. Stephenson decides to try a circus shot because he’s Stephenson…

Hill is able to cut fairly easily here. The problem is that LeBron is overplaying the pass to West now, after being burned by him several times, and he completely gives up the driving lane to Hill. Anderson rotates onto him and Hibbert is able to get the ensuing rebound.  Normally LeBron would stay in front of Hill to stop the drive and we see that Allen is positioned well so that any pass to West should be well covered. Credit to Hill for exploiting James’ error.

Again Hill is able to cut. LeBron here doesn’t position himself correctly and he needs to come more to his right to slow down Hill’s drive. Also notice how high they play this P&R again. LeBron needs to back off a bit; The Pacers aren’t really threatening here. Yes it’s true, West and Hill were very smart here by faking a P&R, going to LeBron’s left before actually playing the P&R the other direction. However when you play such an aggressive form of defense against the P&R, you have to be quick to adjust and LeBron doesn’t do this here. On a positive note, nice show by Wade, but Hill unfortunately doesn’t fall for it.

Here LeBron starts out by fronting West. As LeBron is much more athletic than West, and he can easily intercept any passes over his head, this is a sound strategy. As the play develops, LeBron is employed in a strong side zone (he basically just packs the paint to stop a Stephenson drive). Again, this is perfectly fine, however he has to always be aware of West as he is now susceptible to backdoor cuts, and sure enough, we see what happens when you don’t pay attention.

Coles ends up making a defensive error in this play. He decides to come off of Watson, but he does a good job of covering the passing lane. When you are doing this however, you always have to be wary of any backdoor cuts and Cole never actually bothers to see where his man is. 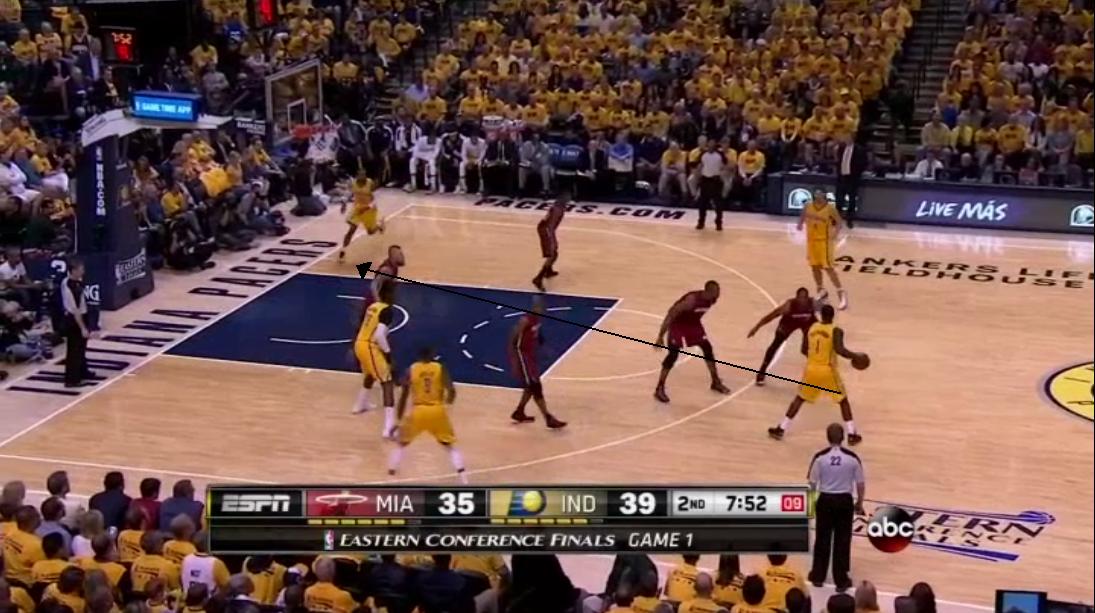 Whilst Watson is making his way to an easy basket, Cole is ruminating over simpler times when the Hi-top fade was cool…

We again see another backdoor cut exploited, this time by George out of Indiana’s motion offense. If you need me, I’ll be crying in a corner…

We now see an example of awful help defense. Chalmers, who is one pass away, decides to slowly walk over to George. He does this because he apparently hates Miami and so he wants to notify George that Hill is open. Look at West and Hibbert who are bunched together, and look at Hill’s positioning. If Chalmers stays near Hill, there’s no way he can make a pass. Okay so let’s stick onto Hill and how about we get Wade (who is a great help-defender) to come in and play a strong side zone? Now LeBron can keep an eye on Stephenson, taking advantage of Hibbert and West’s poor positioning, in case George tries any risky cross court passes and we would see that George is stuck. What actually unfolds makes me wonder if there is anything good in life.

Here we again see poor help defense. Now Wade decides to show, but he’s never in a position to threaten West and he’s actually just exposing a possible pass to the open Stephenson.  Notice how Hibbert is actually blocking the passing lane to Hill. If possible, you always want to overload the strong-side and in this example, we see Chalmers can be very aggressive on West. 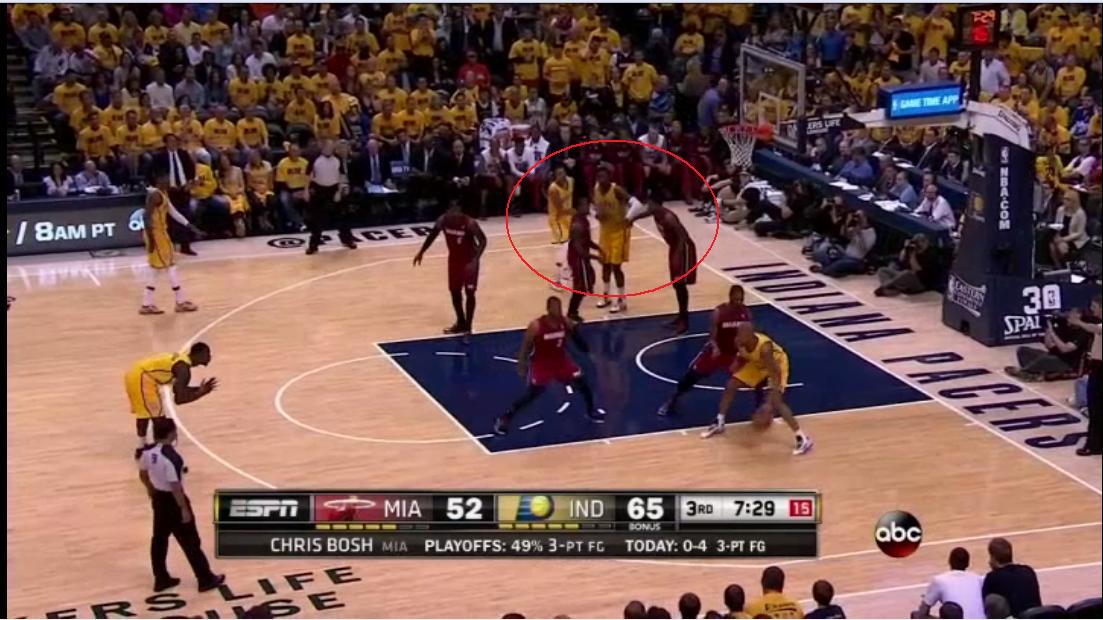 Every time I watch this defensive error by Cole, I want to gouge my eyes out in the hope that I can un-see this sequence of events.  Cole decides to needlessly help ONE PASS AWAY. Seriously, are you counting on Stephenson getting anything from this drive? Wade is covering him and the paint is congested (all the men are well covered there also). Indiana Pacers will get two points from this situation 5% of the time, per Leon Davies (the ever reliable statistician who also told you that there was a 110% chance of an apocalypse yesterday), so you shouldn’t really look to come off your man especially if he is ONE PASS AWAY.

I was serious about the eye gouging…


Usually Miami hedges & recovers when defending the P&R, but LeBron wanted to mix things up by kind of hedging and not recovering at all. I don’t think this will catch on. Seriously, what’s going on in the image below? The passing lanes aren’t covered at all and there is no defensive pressure on the ball handler. There’s no threat of penetration when West slips like that before making any contact and look how high up the court Stephenson is. There’s no need for LeBron to compromise his defensive position like that. LeBron just has to stick with West, but Stephenson instead gets one of the easiest assists of his career. 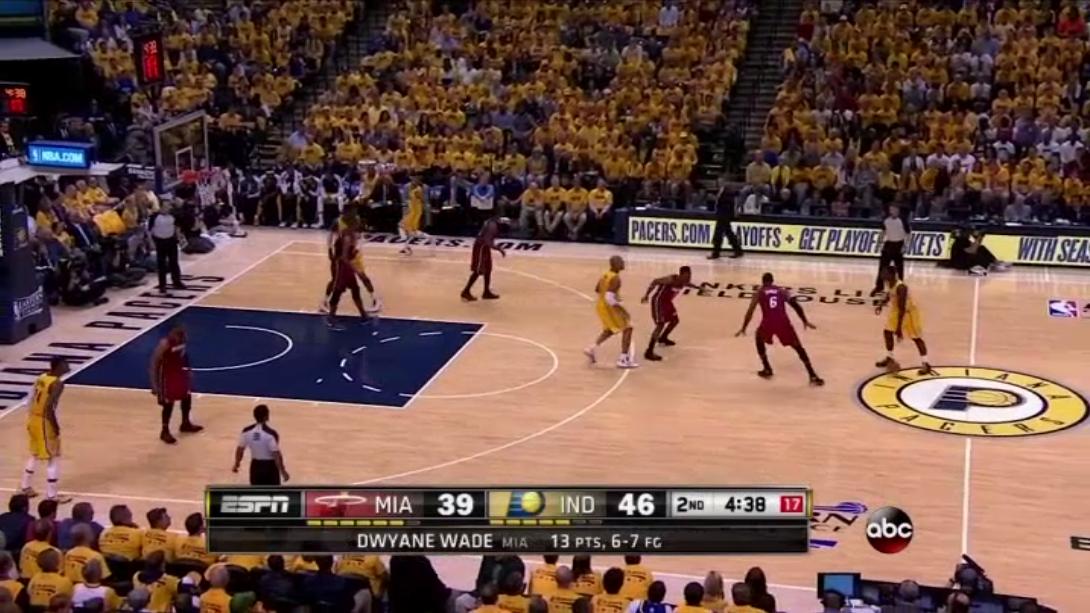 West can easily go to the free-throw line and receive a pass. Notice how the defenders needed to pressurize Stephenson because he is deadly at the half-court threes…

As Hill grabs the offensive rebound, we see West quickly slip behind the two defenders. LeBron and Chalmers do a good job of covering the passing lane however West is still ahead of LeBron. That means there are two possible threats:
1. Alley-oop (have the Pacers ever made an alley-oop by the way?)
2. A pass to Stephenson who can then make the pass to West (you often see this sort of entry-pass coming off a UCLA cut).

As LeBron, all you have to do is recover in time to be able to defend West, who hasn’t established great post-positioning. Instead LeBron cheats and attempts an ill-advised steal and in the end Hibbert gets an and-one opportunity.

Here Bosh comes in aggressively against George, he doesn’t need to do this by the way, and he fails to get back to Hibbert. He instead decides that it would be a good idea to awkwardly walk towards Hibbert. At least he got a nice view of the layup…

In the second half it was quite surprising to see how easily Indiana got to the free throw line. Hibbert now slips in behind the two aggressive defenders. Miami does a good job of covering the passing lanes, however Indiana does a good job of passing it around the perimeter, which stretches the defense and it allows Hibbert to establish good post position. Haslem then gives up the foul.  Indiana was allowed to do this time and time again

Let’s briefly talk defensive strategy. The Indiana Pacers have shown all season that they are not good at creating their own shots. They run a few predictable flex sets to get threes, but that’s it; Their motion offense is only ever used to get post-up opportunities for West and Hibbert. If the Pacers are left to their own devices, they will live and die by the midrange jumper. I gave examples of Miami making defensive errors, which led to baskets, but in truth, the Heat often played their aggressive defense as well as possible, but the Pacers were able to exploit the gaps by slipping screens and rotating along the perimeter. The thing is, if you play an aggressive defense, the gaps you leave behind are quickly apparent. In my opinion, the Heat should look to play a much more conservative defense, thus making the Pacers beat them with good ball movement and player movement (neither of which the Pacers have been able to do usually).

This is Miami’s defensive identity, so we are unlikely to see such a drastic change implemented overnight, but going forward the Heat should realize that more and more teams have figured out how to exploit their defense.

Miami obviously has many adjustments to make and hopefully they’ll make them in time.