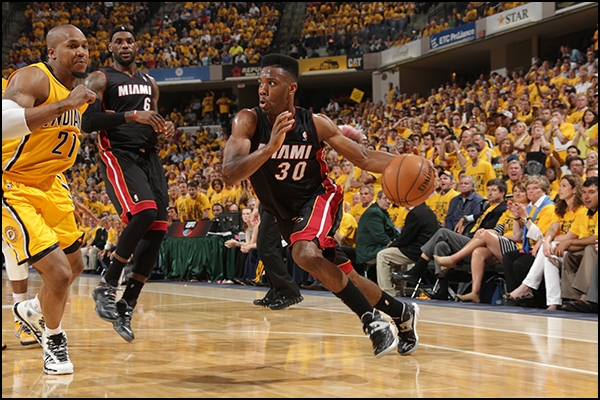 Force him left! The improved defense against the P&R

Allen does well to fight over the screen and corral George to the baseline, and away from the screener. The Miami defenders were often defeated by the Indiana screeners in game 1 and this allowed the Pacers to cut inside.

Why is it so important that Allen forces George left and that he fights to stay over the screen? Well by fighting over the screen you of course make sure that George can’t attempt any threes, but it also means that Allen will always be able to position himself between George and Scola to prevent any passes. Making the right-handed George go left also means he is going to be using his weaker hand, which is just a nice bonus. Usually Battier would come in to contain George’s drive, but Allen defends this so well that he doesn’t need to here. George makes a nice spin around Allen, but at this point he runs into traffic and he is never going to score. We now see the double-edged sword of Anderson’s aggression on defense; he gets many blocks, but he also gives away silly fouls like this one.

Now the Pacers run a transposition of a basic horns set (many plays use this set-up, but see “horns 1 fist” for a widely used, but very simple, play which could arise from this). Just look at how well Cole and James move with West towards the ball handler (by moving with West they are better equipped to deal with any of his screens). In Game 1, they were often times overly aggressive with their hedging of screens when they really didn’t need to be, and this opened up space, which the Pacers exploited. LeBron was particularly prone to over-committing himself from very high and harmless P&Rs. Here LeBron is patient and he is only aggressive once Cole has corralled Watson to the baseline. Again, notice how Cole fights to stay over the screen. LeBron eventually gives up a silly foul, but I was really impressed by how well Miami defended here. 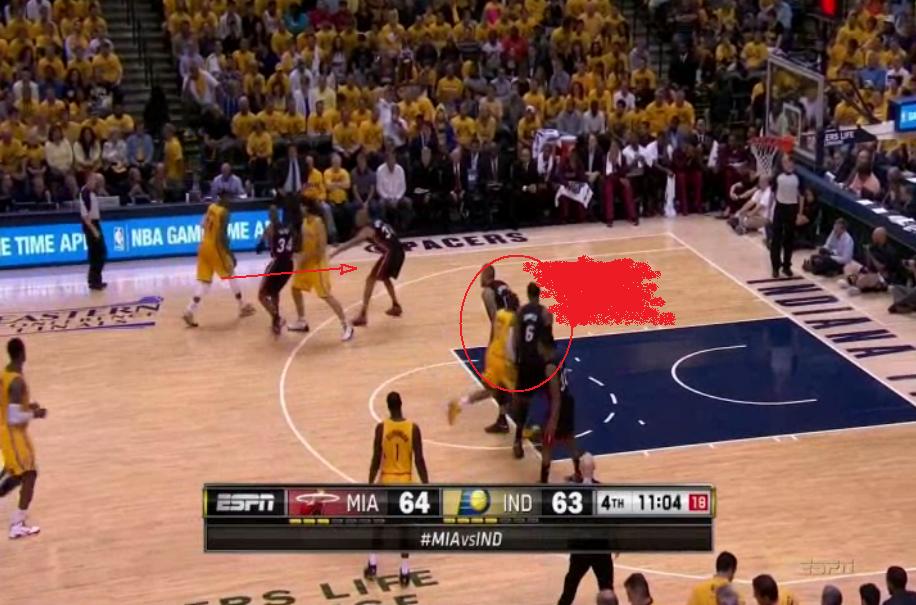 Allen is basically forcing George into the shaded area. Here it’s easy for help defenders to overload the strong-side.

The Miami Heat often defended very aggressively against George. Here we see Allen corral George away from the basket by giving up the baseline. Battier steps in very quickly to cut off George’s drive. Now with this strong-side zone, the two defenders pressurize George whilst also trying to close the passing lane to Scola. As George isn’t too far away from the top, the help defender, here LeBron, would normally position himself between Scola and Watson. He would essentially tempt Scola into taking the long-two. LeBron instead puts immediate pressure on Scola until Battier can recover. They mainly reserved this ultra-aggressive defense for when George had the ball. Why? Well you don’t want George to shoot and/or drive. We also know that George is a poor passer and a poor ball-handler and so pressurizing him and the player he passes to can lead to turnovers.

We actually saw this a lot in game 4 of the regular season this year and in game 2 it worked very well; Although not many turnovers came from this coverage, plays were often stagnated once George had the ball and we also saw that he had a poor shooting performance.

Obviously it’s a very risky ploy, and several times George was able to find the open man, but it’s simply a case of playing the percentages. 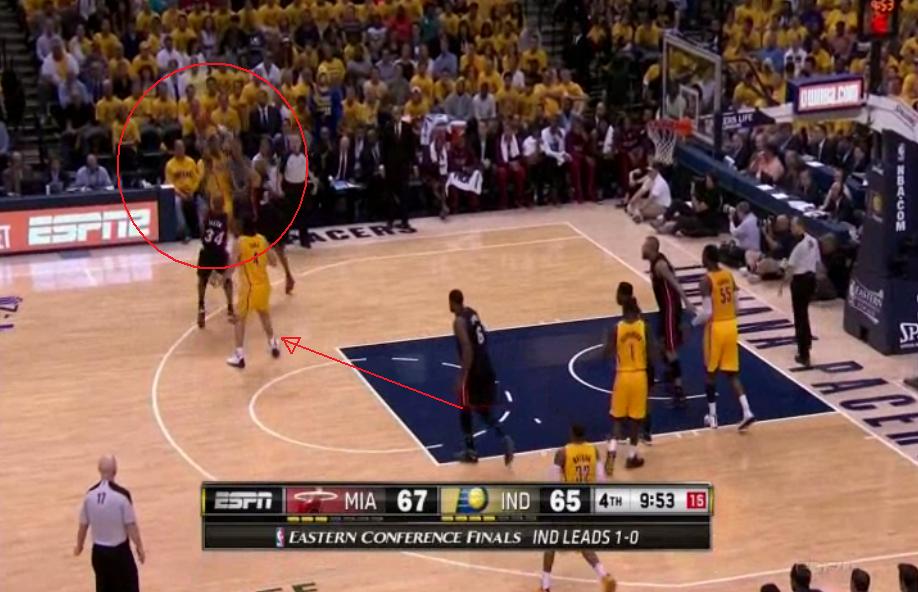 The Heat quickly look to trap George. LeBron is also quick to close out on Scola once he gets the ball.

Stay on him! Miami improves its tracking

We often saw poor tracking by the Miami Heat defenders in Game 1, but this greatly improved over the course of Game 2.  Hill has the ball on the right wing and he passes to Stephenson who comes off of a Hibbert down-screen. Stephenson comes up very high and so Cole does the right thing by backing off and not over-committing himself. Indiana wants to run the dribble-pitch, but the Heat deny this and so the Pacers are forced into their second option. The Pacers often like to have some screen-the-screener actions coming from their motion offense to get George and Hill looks from down-town.  Wade knows this and so he cheats when tracking George’s curling run to be able to cover George. As George isn’t available they have to go to the third option: A Hill basket cut. West could maybe try this, but he doesn’t trust Hill to finish over LeBron. Finally they end up having to make a skip pass to Hill. LeBron quickly closes out and Anderson does a good job of fronting Hibbert initially to deny any quick hits. In the end, Anderson just sticks with Hibbert and the miss was inevitable.

Here is another example of the great tracking by the Miami defenders. Hibbert struggles to find any options and Hill’s forced shot is blocked, leading to a Wade dunk in transition. 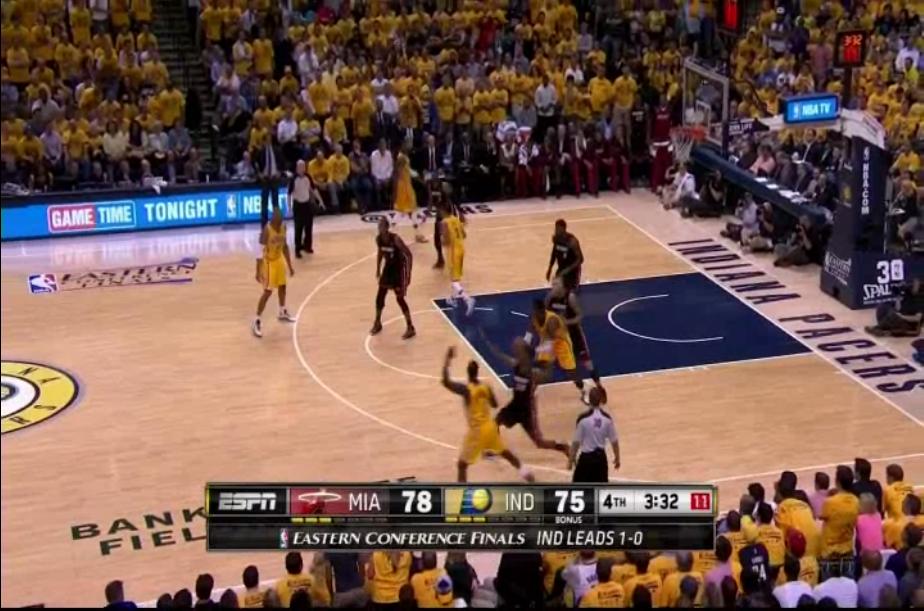 
Do something! How the Heat occupied help defenders whilst also reading the defense

The first play comes from the “4-low” motion offense (notice how there are 4 players out and one player in the low-post). The advantage of this particular set-up is that any side-screen and rolls are made more effective due to the fact that the strong-side is vacated and there are clear driving lanes to the basket. Allen and Cole do well just to make shallow cuts to occupy the defense, we don’t want any help defenders remember, but Allen mistimes his deep-cut to the right corner and he actually obstructs Battier’s driving lane. He’s quick to rectify this mistake by cutting back and forcing Watson to pick him up and now we have a clear driving lane again. Paul George overplays the pass to LeBron and so LeBron does the right thing by making the quick basket-cut for the easy layup. Often times in game 1 we saw the Miami Heat unable to react to what the defense gave them, but they seemed much more responsive in Game 2. This was especially true for LeBron as Paul George often played aggressively on defense and he often overplayed any potential pass to LeBron. I guess this was part of the game-plan by Vogel and it will be interesting to see whether or not he asks George to play more conservatively on defense in Game 3. 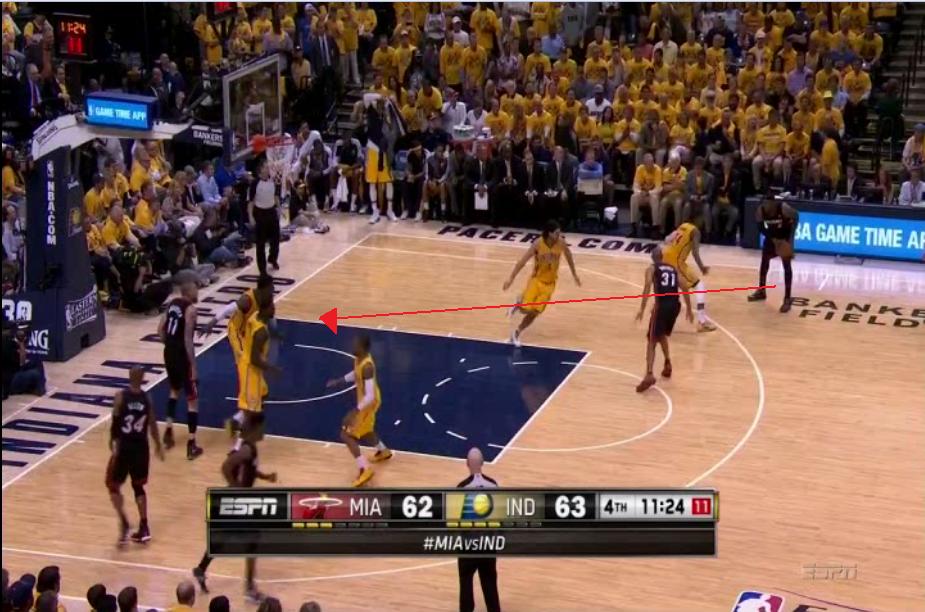 LeBron has a potential driving lane. Also notice how any potential help-defenders are occupied on the weak-side.

Throughout the second half the Miami Heat were able to use a high P&R with James to get some penetration. The defense would often collapse on the James drive which left the corner shooters open. Again look at Cole and Allen making deep cuts to occupy any potential help defenders (Allen later curls off of an Anderson screen). We didn’t see this in Game 1 and Miami’s spacing suffered as a result whenever they played the ‘space-and-pace’ motion offense. The first screen by Battier is well defended, but we see that Scola actually gets stuck when hedging. What does this mean? Well George has to temporarily switch onto Battier to cover him. As a result George is standing far back from James and very close to Battier. This means that Battier can easily set a good screen on George.  James is able to blow past Scola, who really has no idea what to do, before kicking it out to Cole (he could also have found Allen) for the three.

I personally found this play interesting. Now the Heat go into an early horns offense. Normally Anderson and Bosh would flash from the elbow to screen for James. Here they just run straight into their respective screening positions as they want to quickly create motion and misdirection.

Frome here, James basically has a choice of two screens. Whoever sets the screen for James will end up rolling to the basket, whilst the other player will fade and look for the pop. Needless to say, James would rather have Bosh on the perimeter and so he takes Anderson’s screen. Now the initial screen is well defended and so they quickly go into their 4-out-1 in motion offense. They did this several times in Game 2: run a quick play from the horns to get the defense moving or to get a mismatch before looking to cause and exploit misdirection with the motion offense. James and Bosh run a dribble-pitch (shout-out to that old-school play by the way), but West shows extremely well and he stops James. Both West and George overplay the pass to Bosh and so James makes the basket cut with a give-and-go.

Let’s go back a bit though and look at what happens from the dribble-pitch. George and West are both trying to recover their positions when the dribble-pitch is run and so this basically forces West to switch onto James. Okay this doesn’t really end up working as planned, but more often than not LeBron would be able to exploit this mismatch. 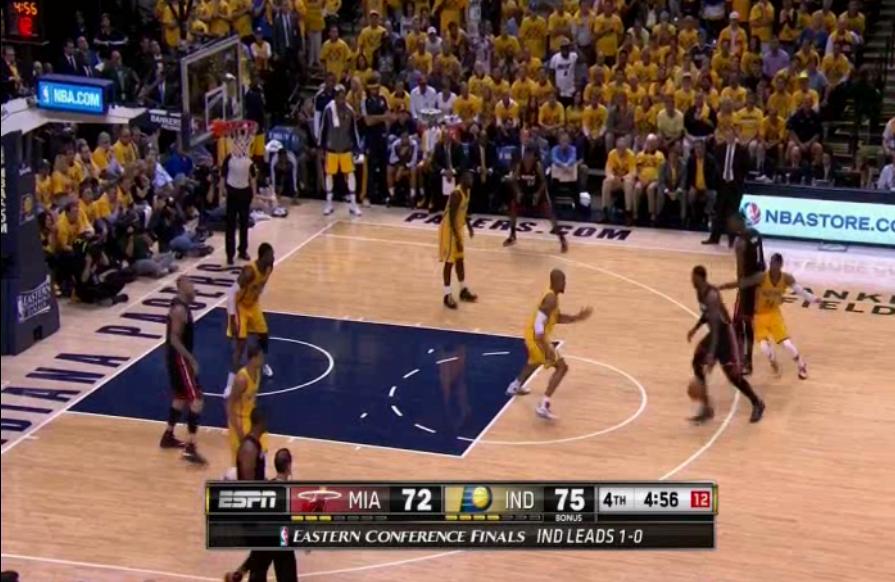 This set worked well as we now see LeBron can either look to exploit his mismatch with West, or he can pass to the rolling Bosh.

Again George overplays a pass from James who makes the basket cut with a give-and-go and he gets two free-throws from it.

Here we see the advantage of keeping Wade on the corner and not as a ball-handler in the motion offense: Wade is able to make backdoor cuts, especially off of penetration from James. The Heat don’t run anything special, just a pick and slip, but we again see how well James was able to speed past the Indiana forwards after exploiting George’s over-aggressiveness. Again, notice how West hedges even though there’s no real danger at this point (the Heat did this a lot in Game 1) and also notice how many defenders collapse on the James drive. Wade notices this and he makes the backdoor cut to get the nice dunk.

The Heat played very well and though there were many important facets to this game, I feel like these ones were key to the Heat’s success in the 4th quarter. Many adjustments will once again be made by both teams. Will the Heat run more horns as they did early in the game? Or will they stick with their ‘space-and-pace’ motion offense? Will the Pacers make the same defensive adjustments that the Heat had to make on their P&R coverage? Will I ever stop asking you questions?