An Inside Look at the Miami Heat’s Grueling Practice Culture 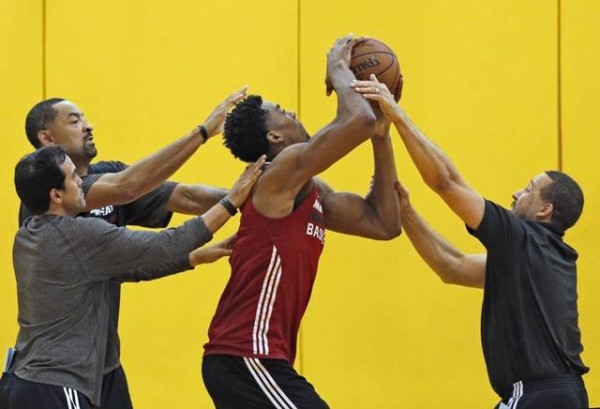 If an NBA player isn’t willing to work to get in the best shape of his life, that player would not survive a day of the Miami Heat‘s training camp. For years now, Heat president Pat Riley has maintained a heavy emphasis on transforming NBA players into the best physical versions of themselves possible. Just ask Dion Waiters what the conditioning process is like within the Heat organization:

“We’re going to get you in world-class shape,” Riley told Waiters last summer, as he recounted this week via The Players Tribune. “Not good shape. Not great shape. World-class shape. Give us a season, and you’ll see.”

Riley kept his promise to Waiters, too, as evidenced by the two-guard’s before-and-after photos that were recently posted online:

“After one week, my body [was] shot,” Waiters said of Heat training camp. “I was damn near throwing up in trash cans like in the movies.”

That’s simply the way it is down in Miami — the Heat run a tight ship. To be fair, Riley generally tries to “warn” new, incoming players that the Heat do things a little differently. According to one current Heat player, everything starts with the team’s standard for conditioning, which is set at a much higher level than that of most other franchises.

“When camp started, it was definitely different,” the unnamed player said. “With other teams, they may have veterans who can’t run as much so the training camp is kind of built to accommodate those guys. In Miami, we were all trying to make a name for ourselves so it was competitive and we were all ready to work hard. We had sayings like, ‘No fake gym rats,’ ‘No excuses,’ and, ‘Always get one percent better.’ If you came to the gym, it wasn’t to make an appearance so the coaches can see you. You’re coming to get better. We don’t want any fake gym rats.”

This process is certainly not for everyone, but that’s the way it’s always been with Riley running the show in Miami. There are never any exceptions, either.

As one experienced agent tells it:

“Either you buy in and you’re part of the Heat culture, or you’re not,” he said. “They go after players who want to work and put in the necessary time to get better. They look for those kind of guys – the ones who have good character and want to work. They go extremely hard. They like to lift heavy and run a lot. Their strength-and-conditioning program is an emphasis. They like for guys to report early – usually about six weeks early – so that guys can focus on weightlifting and their agility and getting quicker. They’ve been doing it for a long time and they take it very seriously. They will push you to the limit.”

For the guys that can stick with the Heat’s grueling, year-round training regiment, they’re the ones who tend to benefit in a number of calculable ways. James Johnson, for instance, lost nearly 40 pounds by the time Miami’s regular season had started. Not that he was in bad shape before, but he wasn’t in “Heat” shape.

The result: a career-best season for the 30-year-old veteran. Now, he’s likely due for a major big-money contract this offseason due to his surprisingly stellar season, which was no doubt aided by his newly established “world-class” physique.

“This culture is real,” Johnson said. “We have the kind of practices where you can’t go out and hang out all night and think you’re going to be able to come to practice and really go hard because I’ll call you out, everybody on this team will call you out. We won’t leave it to the coaches to call you out. We take care of that ourselves.”

Even just watching the Heat in the second half of the 2016-17 season, it was clear to the naked eye who the better conditioned team was whenever the Heat hosted or visited opposing teams. Their superior conditioning was a major factor in their historic midseason turnaround, as they were often able to beat teams into submission by tiring them out completely:

“Their conditioning played a big role in their success over that stretch,” another NBA agent recently said. “This is why they run so much in the offseason, in training camp and during the season. They run like gazelles and work extremely hard to prepare for stretches like that.”

Even with superstar-level talents (that generally come with superstar-level egos), Riley never lets anyone get away with not putting the proper work in. Back in the mid-2000s when Dwyane Wade was on top of the NBA world and still known as “Flash,” the “Godfather” had no problem calling out his franchise player in front of his teammates after Wade had “bulked up” during the summer months. As one former Heat player tells it, Riley was quick to address Wade’s newly added “bulk” by the time training camp rolled around:

“No, you’re fat,” Riley reportedly told Wade, who was about 10 pounds heavier than his typical playing weight. “Who would have the balls to tell Wade that, other than Riley?!” the former player asked rhetorically.

The incentives for putting up with this kind of “abuse” are plentiful (just ask Johnson), but in order to enforce these grueling workout policies, there are consequences in place for when a player isn’t quite keeping up. To ensure Heat players show no weakness during practices and games, they have a strict rule in place that any player will be charged $100 if they ever “take a break” at any point or if they “put their hands on their knees for a breather,” according to one inside source.

In order to measure the progress each player makes, Miami does something no other franchise does regularly — they take before and after photos. At the beginning of each week, the Heat measure everyone on the roster by weight and body fat percentage. Then, customized goals are established for each individual player. If a particular player doesn’t meet his goal, there are consequences, although according to Johnson, everyone meets their goals because they’re too afraid to learn what those consequences might be if they don’t.

Even LeBron James, who doesn’t have the best history with Riley and the Heat front office, was happy to hear that Derrick Williams (acquired by the Cleveland Cavaliers before the trade deadline this season) was coming over to Cleveland from Miami because he knew Williams would be in excellent shape.

This “high standard, high accountability” approach is really just business as usual for the Heat. The bar in South Beach is permanently set at the highest level, therefore, the expectation for Miami never changes. Riley, along with Erik Spoelstra expect to “compete for a championship” every single year and that all begins by ensuring everyone wearing a Heat uniform is in peak physical condition.
[xyz-ihs snippet=”Responsive-ImagenText”]