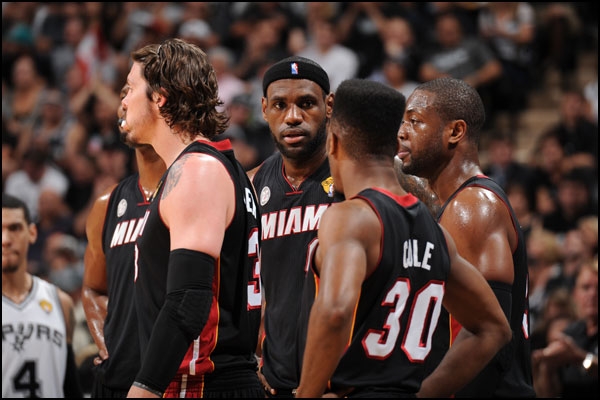 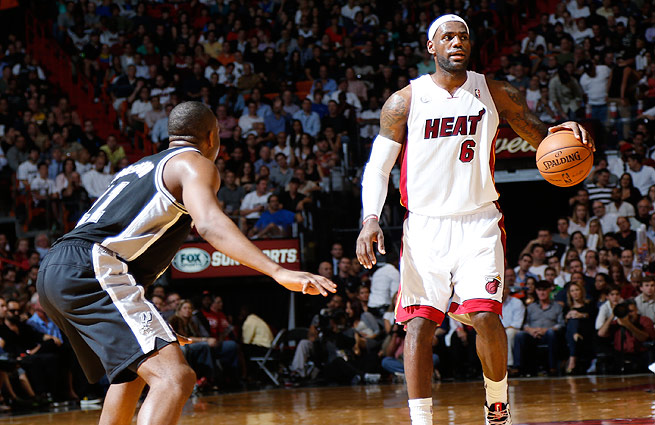 (Photo Credit: ESPN) Many would consider the “Big Three” era a failure if the Heat come up short this year against the Spurs.

Facing elimination in a playoff series, the Miami Heat are all too familiar with this scenario.  With their backs against the wall, win or the season ends in disappointment, the Heat are preparing for yet another pressure filled situation.

Down 3-2 in the NBA Finals best of seven series, Miami will host the San Antonio Spurs at the American Airlines Arena with the hopes of preventing a bitter Spurs’ celebration on their home court and forcing a game seven Thursday.

In the 2011 NBA Finals, Miami found itself in the same situation and were unable to force a game seven against the Dallas Mavericks.  But that was the first year of the “Big Three” era with a feeling out process still ongoing.  Now the Heat have a chance to prove that their star-studded cast is as a good as advertised and James is well aware.

“As a leader of this team, I do put a lot of pressure on myself to force a game seven and I look forward to the challenge,” James said.

On Sunday, Miami slipped up in San Antonio as the Spurs shot 60-percent from the field en route to a 114-104 victory.  If history repeats itself, the Heat can escape Game 6 without having to wait until October for redemption.  Miami has yet to lose back to back games since January and are 6-0 in the playoffs following a loss, blowing out teams by an average of 20.7 points.

After struggling in the first four games, Manu Ginobli found his name in the starting lineup for the first time this season and scored 24 points while dishing out 10 assists.  The combination of Dwyane Wade and Ray Allen will have to prevent Ginobli from taking over in order to win.

“We’re in a position where it’s a must-win and everything that we have done all year comes to this point and we have to win,” Allen said.

Playing a critical role as a spark off of the bench in prior series, Chris Andersen saw as much playing time as the fans looking on in game five, but look for the “Birdman” to enter the game as an energizer for his teammates.

In game five Miami was able to commit fewer turnovers and connect on more three pointers than San Antonio but shot a dismal 43-percent from the field.  The Heat will have to be more aggressive in attacking the hoop and not settling for contested jump shots.

“Offensively we were not very efficient, did not move the ball the way we needed to,” Heat Coach Erik Spoelstra said.  “We have seen basically every matchup, we just weren’t executing with any precision.”

With one of the most unsuspected statements as the NBA Final’s Most Valuable Player, Danny Green and his NBA Finals record 25 three pointers made in the series has become one of Miami’s biggest concerns.

“Opportunity is everything,” James said.  “Coach Popovich gave (Green) an opportunity and he is just trying to seize the moment.”

The Heat will have to rely on their stifling swarm defense and quick rotations in order to prevent another barrage of shots from deep.  If the proper adjustments are made, Miami will have a chance to force a deciding game seven and not feel the same dismay as in the 2011 NBA Finals.

In the past four games, each team has won by a double-digit point margin, yet the formula remains the same.  Win at home and force a game seven.

“The most important game is game six,” James said. “We can’t worry about a game seven; we have to worry about game six.”