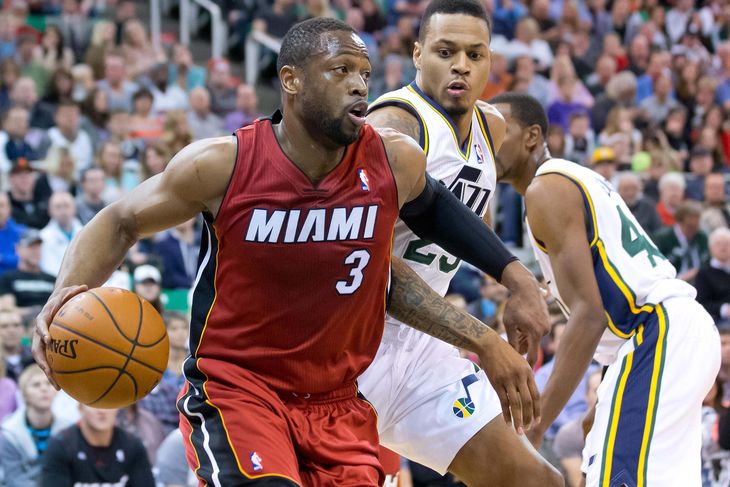 (Miami, FL) – The Miami Heat (12-13) return to American Airlines Arena Wednesday night to face the Utah Jazz (6-19) for the second time in five days. The game will mark the start of a seven-game home stand for the Heat.

The Heat beat the Jazz 100-95 at EnergySolutions Arena in Salt Lake City last Friday thanks to an inspired effort from star guard Dwyane Wade, who scored 29 points and handed out seven assists despite not feeling well.

“You don’t ever want to be sick at all, but I do know when you have an injury or if you’re sick, it makes you focus a little better,” said Wade of his impressive performance that night.

Wade’s All-Star teammate Chris Bosh chipped in with 22 points and nine rebounds in that game, but has not played since due to a left calf strain. The center is out indefinitely.

His return remains uncertain, and adding to the Heat’s injury woes, forward Josh McRoberts will likely miss the rest of the season with a torn meniscus in his right knee. The injury occurred in the Heat’s win over the Phoenix Suns last week.

After absorbing the bad news over the weekend, along with a blowout loss to the visiting Chicago Bulls Sunday night, the Heat flew up to Brooklyn Tuesday night to play the Nets at the Barclays Center.

Wade, still feeling the effects of a stomach virus, was not sure he would be able to play. But in a performance reminiscent of his game against the Jazz last week, Wade led his team to victory, 95-91, and filled up the box score with 28 points, five rebounds, and four assists.

Wade had a bowl of chicken soup prior to the Utah game. What fueled him Tuesday night?

“I had three pieces of toast and a banana. That’s all I had to eat today, but it got me through,” Wade said following the game.

Wade also talked about the virus that he has been dealing with since last week.

“(It’s the) same as everybody’s going through, some kind of bug. Some people throw up a lot, some on the toilet a lot – lot of different stuff,” he said.

Heat coach Erik Spoelstra is hoping the bug sticks around.

“I don’t wish anything bad on Dwyane. I just hope he’s sick again tomorrow,” Spoelstra joked to reporters in his postgame press conference.

The Heat will also need Luol Deng to continue his recent strong play in the absence of Bosh. The Heat’s starting forward had 18 points, six rebounds, and four assists in 41 minutes against the Nets.

Speaking to the media after the game, Deng said,

“I’ve got to keep on trying to fit in. There’s a lot of guys going through the same thing. It’s all about guys getting comfortable with what I do.”

The Jazz arrive in Miami losers of three straight games, including a 119-111 decision to the New Orleans Hornets Tuesday night. Utah has won only two road games this season, but both were against Eastern Conference teams – the Detroit Pistons and the New York Knicks.

The status of Jazz starting forward Derrick Favors is uncertain for Wednesday night’s matchup against the Heat. Favors, who is averaging 15.6 points and eight rebounds per game, has missed the last two contests with a sprained right ankle.

Though both teams will be playing on the second night of a back-to-back, the Heat will not play on consecutive nights the rest of the month and they will not leave Miami until New Year’s Eve.

A win would put the Heat to .500 for the first time in two weeks.

Tipoff is set for 7:30 PM EST at American Airlines Arena. The game will be broadcast on Sun Sports.
[xyz-ihs snippet=”Responsive-Ad”]