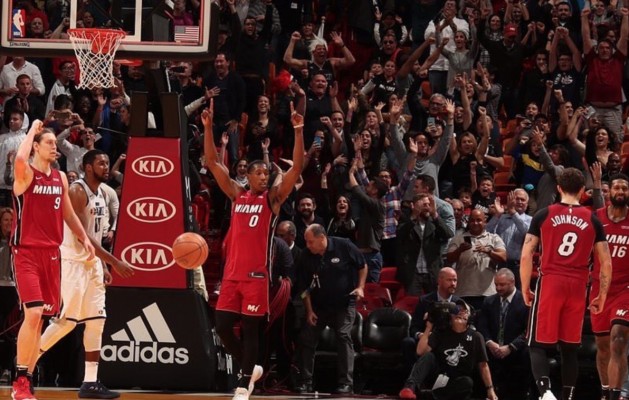 (Miami, FL) – The Miami Heat have finally begun to take advantage of playing in front of their home crowd as of late. After struggling at American Airlines Arena earlier this season, the Heat looked to win their third home game in a row when the Utah Jazz came to Miami on Sunday afternoon.

While Miami had trailed for much of the second half of the game, it managed to turn it on when it mattered most to steal the win in a thrilling one-point victory, 103-102.

“Even just looking down at the other end after the buzzer went off. Utah played a very good basketball game, in many ways they deserved to win this one,” Heat head coach Erik Spoelstra said. “We’ve given up some games that we wish we could have had back so quite frankly we need to steal some. When you have these opportunities at home, even when you’re being outplayed, just to find a way to show some resiliency, some toughness, some grit, get over the hump. Forget about whether it’s a well-played game or not, but just find a way at the end and that’s what the guys were able to do.”

With just under seven minutes left in the game, the Jazz had claimed an eight-point lead, 91-83, and were looking for more. Miami seemed to sense that it needed to make a move soon or accept defeat, and make a move it did.

The Heat scored on their following two offensive possessions. First, Goran Dragic, who finished the game with 16 points, six assists, and three rebounds, glided into the lane to convert on a layup. Then, Hassan Whiteside, who recorded his first double-double since returning from his left knee injury with 14 points and 10 rebounds, tipped in a Dragic miss on the following offensive possession to cut the lead to six points.

Utah managed to extend its lead to seven points with just under four minutes left in the game, but Tyler Johnson, who finished the game with 16 points, hit a huge 3-pointer to bring the Miami deficit back to four points.

The Jazz scored quickly and brought their lead back to six points on their following possession, but the Heat punched back once again. First, Dragic converted on a layup. Then, Kelly Olynyk was fouled on his way to the rim and went 1-of-2 from the line to cut the lead to three points with 2:23 left in the game. Jazz guard Rodney Hood answered on the other end of the court, however, and hit a clutch jumper to give his team a 100-95 lead with just over two minutes left in the game.

Then, the Josh Richardson show began. Richardson cut the Miami deficit to three points after hitting a layup. On Miami’s following defensive possession, Richardson forced a turnover that led to two Dragic free throws to bring the score to 100-99 with under a minute left  to play.

Jazz rookie phenom Donovan Mitchell hit a huge jumper to give his squad a three-point lead moments later, but Olynyk was then sent to the line and went 2-of-2 to bring the score back to a one-point difference with 37 seconds left.

Hood attempted to ice the game with a long three-point shot on the subsequent Jazz possession, but he failed to hit the mark. Dragic grabbed the rebound and with just seven seconds left in the game, Spoelstra called a timeout to draw up a final play.

On the inbound pass, Richardson got the ball at the top of the key and masterfully sliced into the lane to score the easy layup to claim a one-point lead with just five seconds left in the game.

Josh Richardson with the clutch lay-in to lead the @MiamiHEAT to victory!#HEATCulture pic.twitter.com/EUafcM2kFg

Richardson played hero on the following defensive possession as well when he locked Mitchell up defensively and forced a horrible shot that bounced off the rim as the final buzzer sounded.

“The play was for an earlier rep and I came back up and we were going to play from there. Kelly set a great screen and I just took advantage of the speed advantage,” Richardson said of the game-deciding shot before talking about getting another close victory. “We’re tough. We’re very resilient and I think it’s good practice for us getting ready for the playoffs that we hopefully get into. A lot of teams don’t get that experience early and then they get into the playoffs and it’s like shell shock. So for us to get it this early is great.”

The Heat have definitely turned a corner on their season. While they failed to string together wins earlier in the 2017-18 campaign, they have now won four straight games and have proven victorious in 10 of their last 14. They will have the opportunity to prove that their success can continue against one of the league’s best teams when they travel to Toronto to face off against the 27-10 Raptors on Tuesday night.
[xyz-ihs snippet=”HN-300×250-TextnImage”]