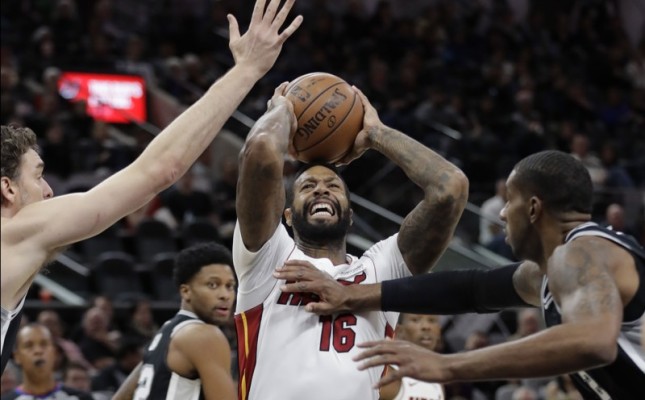 (San Antonio, TX) – The Miami Heat continue to lose big against some of the best teams in the NBA. While they led for much of Wednesday night’s matchup against the San Antonio Spurs and traded shots with one of the NBA’s elite teams late into the game, the Heat went ice-cold in the crucial minutes of the final quarter of the game on their way to another double-digit loss, 117-105.

“They just get you scrambling and the way they move the ball is exceptional,” Heat head coach Erik Spoelstra said of the Spurs following the game. “They’re the definition of good to great and their pace, even though they don’t place a fast pace in terms of scoring, but their half-court pace is up there with anybody in the league.”

The Heat headed into the final frame of the game within striking distance, down just four points, 86-82. Early in the quarter, however, the Spurs pulled ahead by nine, 93-84, forcing a Miami timeout. The timeout couldn’t kickstart the Heat, though, and after several fruitless offensive possessions, their deficit had extended to 15 points with just under seven minutes left in the contest.

In the waning minutes of the game Miami was at risk of suffering another embarrassing blowout defeat. They battled back, however, and after Tyler Johnson hit a clutch 3-pointer with just over three minutes left in the game, Miami found itself back within striking distance, 109-103. The hope of a late-game comeback quickly vanished as the Spurs clamped down and ended the Heat’s bid for any last-minute heroics.

While the final score did not indicate it, the majority of Wednesday’s contest was viciously competitive. As has been the case for much of the season, Miami started off the game hot and jumped ahead to a 12-6 lead. Thanks to their highly efficient three-point shooting early on, the Heat led for the entirety of the first quarter. Josh Richardson, who finished the game with 19 points, two rebounds, and two assists, helped lead the Heat, and Johnson enjoyed an offensive explosion off the bench and finished the contest with 25 points on 9-for-12 shooting from the field and 5-for-8 shooting from beyond the arc.

The Heat were up eight points to begin the second period, but the Spurs showed no signs of going away. Little by little the Spurs’ team-oriented approach chipped away at Miami’s shrinking lead. With just over five minutes left in the half, the Spurs claimed their first lead of the night, 47-46.

The Spurs’ commitment to team basketball played a huge role in their eventual victory on Wednesday. While the Heat depended on Richardson, Johnson, and Dion Waiters, who finished the game with 22 points and five assists, to lead their offense, the Spurs were able spread the wealth. By the end of the contest, no player on the Spurs roster had scored over 20 points, but eight players finished with double-digit point totals.

Following the game, Waiters continued his recent campaign to get himself and his teammates more favorable foul calls:

In the third quarter, both teams battled valiantly. Every time it looked like the Spurs were going to extend their lead, the Heat hit back and the momentum swung back in their favor. By the end of the quarter, however, Miami’s shooters had begun to cool and the squad had nowhere to turn.

Point guard Goran Dragic struggled once again, as Wednesday’s contest marked the fourth time he failed to reach a double-digit point total in the five games since he was named the Eastern Conference Player of the Week. In an apparent attempt to shake things up, Spoelstra made changes to his teams’ starting lineup, but both James Johnson and Kelly Olynyk failed to have much of an impact on the game in their starting roles. James Johnson finished with nine points, six assists, and three rebounds, and Olynyk managed an underwhelming five-point, eight-rebound, and four-assist performance.

“They’re a good team, if you make mistakes they’re gonna make you pay,” Olynyk said from the team’s locker room. “Defensively they fly around, help each other, get lots of deflections, hands on ball, it’s really active. That’s somewhere, we’re trying to get to that level. It was a good game for us and we just got to keep getting better.”

The Heat matched up fairly well against the Spurs both on the court and on the stat sheet. Nonetheless, the one glaring difference between the two teams shined a light on the eventual outcome. While Miami managed just 28 points in the paint, the Spurs attacked the rim throughout the game and finished with an overwhelming 54 points in the paint. Similarly, the Spurs outmatched the Heat on the boards, winning that contest 34 to 29.

Despite that fact that Miami has now suffered four losses in its last five games, it’s still second in the Southeast Division and just two games back from the eighth seed in the Eastern Conference standings. While the outcome of Wednesday’s game is not ideal, the Heat did show the grit that would have allowed them to battle back against many teams in the NBA. Unfortunately for them, that kind of grit often falls short against the powerful Spurs.

The Heat will look to turn things around on Saturday night when they travel to New York City to face off against the Brooklyn Nets.
[xyz-ihs snippet=”HN-300×250-TextnImage”]