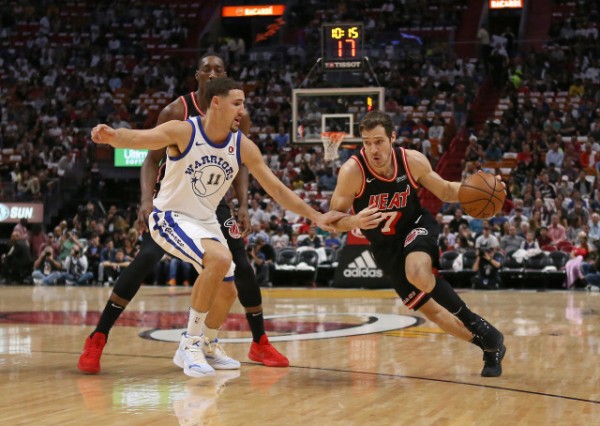 Goran Dragic and Dion Waiters are two of the Miami Heat‘s most prolific scorers, but according to Heat head coach Erik Spoelstra, they aren’t being treated as such.

Before Sunday’s loss to the Golden State Warriors, Spoelstra backed his players’ frustrations surrounding the fact that they have not enjoyed the same foul rate when driving to the basket as other scorers around the NBA.

“Goran and Dion do have a point. They have a point,” Spoelstra said Sunday. “They are as aggressive and productive of getting into the paint as any two guards in the league.”

“They don’t flop,” Spoelstra said of the Heat’s starting backcourt players. “They don’t have the nuances of subtly drawing fouls. They drop their head, they drop their shoulders, and it is an aggressive drive into the paint.

“You see them colliding with bodies all the time, and it’s not just at the rim. Now, Goran gets more adjustments and hits at the rim than any player that comes to mind, and he rarely gets that call.”

Spoelstra continued to say that he is not offering excuses for his players or his team, but simply that he does appreciate their frustration with not getting the kinds of calls that their colleagues around the league seem to be getting on a nightly basis.

“I’m not giving them an excuse, but I understand their frustration,” Spoelstra said. “Because it’s real. They get to the paint. It’s hard to tell them something rationally why they’re not getting calls. I don’t know.

“I want them to continue to play, to be that determined to get into the paint, because they make so many good things happen for the team. And then, eventually, hopefully, they’ll start getting the recognition and the deserved respect in order to go to the line a few more times.”

Surely, the lack of foul calls does not explain the fact that the Heat have lost three of the their last four games in blowout fashion, but it is clearly beginning to aggravate Dragic, Waiters, and the rest of team.

There’s no telling whether or not Spoelstra backing his players will have the desired effect, but there’s no harm in trying. While some of the league’s biggest stars are criticized for complaining when not granted their fair share of fouls, the NBA has proven time and time again that when it comes to foul calls, the squeaky wheel often gets the grease.
[xyz-ihs snippet=”HN-300×250-TextnImage”]