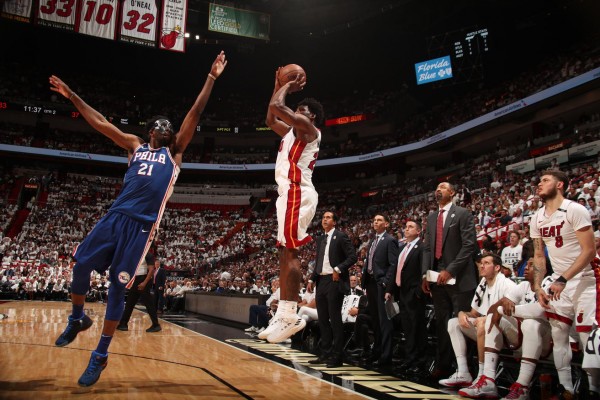 (Miami, FL) — A deadly fourth-quarter combination of cold shooting and defensive struggles doomed the Miami Heat as they dropped Game 3 of their first-round series to the Philadelphia 76ers by a score of 128-108 at American Airlines Arena on Thursday night. The loss gives the Sixers a 2-1 lead in the series and erases the home-court advantage the Heat had gained after their Monday night win in Philadelphia.

At the start of that fourth quarter, the 76ers had held just a slim two-point lead in a game that had been tight throughout. That changed almost immediately when Philadelphia scored nine of the first 10 points in the period, with Miami never getting closer than five points the rest of the way. Over the final 6:51, the 76ers used a 20-6 run to turn the game into a rout.

“They started making shots, some in rhythm, some uncontested, some we did contest,” Dwyane Wade said after the game. “We couldn’t keep it going offensively and they capitalized.”

“They hit some big shots, some threes and we weren’t able to execute against some of the pressure on pick-and-rolls,” Heat head coach Erik Spoelstra said during his postgame press conference. “It kind of flattened us out and they just kept on scoring. They went on a big run and it kind of got away from us.”

Goran Dragic led the Heat with 23 points and also handed out eight assists, while Justise Winslow finished with a double-double with 19 points and 10 rebounds. Three starters were the only others to score in double-figures, led by Josh Richardson‘s 14 points. Joining Richardson were James Johnson with 12 and Tyler Johnson with 10, though in the latter case, eight of those points came early in the game.

“Our offense got kind of stagnant, but I think the biggest thing is that mentally, we lost that focus,” Winslow said of the fourth-quarter troubles. “After losing that intensity for two or three minutes and once the shots started going down, we started getting disconnected.”

In the early going, the Heat defense was clearly focused, limiting the 76ers to just 3-of-12 from the field to start the game. However, the Sixers were able to get to the foul line enough to allow them to stay within a point at 18-17 with just over five minutes left in the quarter. Over the next three minutes, Philadelphia then unleashed an offensive barrage, fueled mostly through long-range bombs, to forge a 15-3 run. That was countered in the closing moments of the period with a 12-5 surge by the Heat that was also powered by 3-pointers, though the 76ers still held a 37-33 advantage when the quarter ended.

“Every time that we had a little bit of a hesitation or made a mistake defensively, they made us pay for it,” Spoelstra said. “That’s the challenge we face and just have to figure it out and complete it for a 48-minute game.”

The second quarter saw both teams tighten their defense somewhat, though they still managed to each connect on four 3-pointers during the period. As the two teams headed into halftime, the Heat held a slim 64-63 lead in what had become an increasingly testy contest that was highlighted by two incidents. The first was a near fight between the Heat’s Wade and the Sixers’ Justin Anderson early in the quarter, with the second coming in the latter stages of the period when Winslow deliberately stepped on the face mask of the 76ers’ Joel Embiid.

“We were smack-talking, trash-talking, going back and forth, but no love lost,” Winslow said in response to a question about his incident.

The two teams get back on the court at American Airlines Arena for Game 4 on Saturday afternoon, with the contest set to tip off just after 2:30 p.m.

“We look at the way they guard us and try and figure out ways to be better,” Wade said.