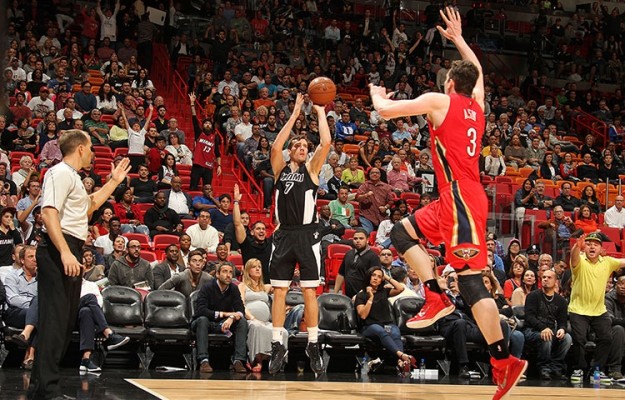 (New Orleans, LA) – In the wake of a miraculous 93-90 overtime victory against the Orlando Magic at Amway Center on Wednesday night, the Chris Bosh-less Miami Heat (25-31) will look to knock off the also banged-up New Orleans Pelicans (30-27) on Friday night at the Smoothie King Center. The game is slated to tip off shortly after 8:00 pm ET and will be broadcast nationally on ESPN.

With Miami down 83-75 to Orlando with just 42 seconds remaining in regulation, the Heat managed to take advantage of the opportunities they were given in the final stretch. Newly acquired Henry Walker, who signed a 10-day contract on February 21st, came up clutch in the last 22 seconds of the fourth quarter.

Despite going one of nine from the field up until that point in the game, Walker showed he had ice in his veins and drilled two threes within a matter of 20 seconds, the second with only two ticks remaining on the clock to force overtime at 85-85.

After the horrible news of 10-time All-Star power forward Chris Bosh being lost for the season with blood clots in one of his lungs, the Heat have responded by going 3-1 in his absence since the All-Star break. Bosh was in high spirits following the victory over the Magic.

Great win by the fellas tonight! Big Walker with the BIG SHOT! #HeatNation

With the news on Thursday of former 2008 second overall pick Michael Beasley having signed a 10-day contract with the Heat, Walker will be reunited with his college teammate from Kansas State University. Like Beasley, Walker was also selected in the 2008 NBA Draft at 47th overall by the Washington Wizards, but was immediately traded to the Boston Celtics.

The Heat will need to come out with a sense of urgency this time against the Pelicans, as Miami found themselves in a double-digit hole early in last Saturday’s 105-91 loss to New Orleans at American Airlines Arena. Despite the Pelicans losing All-Star power forward Anthony Davis to a sprained right shoulder and three-point specialist Ryan Anderson to a sprained right knee in that game, the Heat never took advantage of the opportunity to make a rally.

In addition to point guard Jrue Holiday (15.2 points and 7.1 assists per game) being out for more than a month now with a right leg injury, both Davis (23.9 points, 10.3 rebounds and 2.7 blocks per game) along with Anderson (14.6 points, 5.1 rebounds and 111 three pointers made) will be inactive against the Heat on Friday night, a big blow to the Pelicans going forward.

Down in the paint, Hassan Whiteside will certainly be counted upon to wreak havoc against the likes of Pelicans center Omer Asik, power forward Dante Cunningham and center Alexis Ajinca. As for Goran Dragic and Dwyane Wade in the backcourt, look for them to be secured in a tight matchup with guards Tyreke Evans and Eric Gordon.

For the Heat, an important statistic worth noting from Wednesday was they improved to 9-0 on the season when Luol Deng scores at least 20 points. With that in mind, it’s essential that Deng develops a consistent scoring rhythm early in the game.

Norris Cole, who was sent to New Orleans in a three-way trade with the Heat and Phoenix Suns on February 19th, has thrived in three games with the Pelicans. A two-time champion with Miami, Cole has averaged 12.7 points and four assists per game thus far.
[xyz-ihs snippet=”Responsive-ImagenText”]