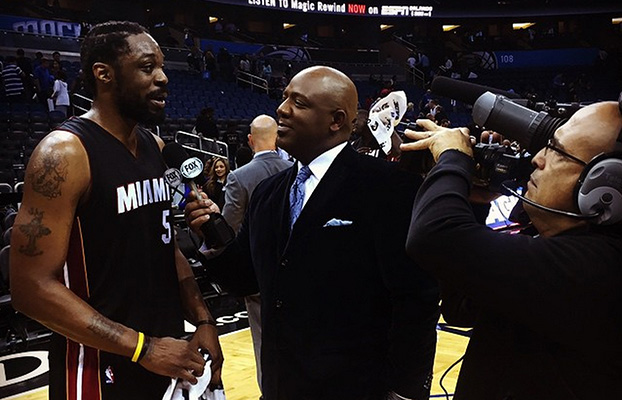 (Orlando, FL) – The Miami Heat (24-32) came from behind to stun the Orlando Magic (19-40) in overtime at the Amway Center Wednesday night, 93-90. The victory gave the Heat consecutive wins for the first time in a month.

Trailing by eight points with 42 seconds left in the fourth quarter, the Heat mounted a furious rally to send the game into the extra session. Point guard Mario Chalmers made two free throws and Dwyane Wade hit a short jump shot to cut the Magic lead to five points.

Orlando shooting guard Victor Oladipo and center Nikola Vucevic each made a free throw in between, setting up the Heat’s late game heroics from a most unexpected source.

Henry Walker, a shooting guard in his fourth year out of Kansas State and whom the Heat recently signed to a 10-day contract, drained two three-pointers in the final 22 seconds of regulation to tie the game at 85.

Walker told reporters after the game that he was ready for the moment: “At the end I just wanted to come through on my end of the deal. I have faith in my shot.”

Walker had missed his first seven three-point attempts of the game, and missed two more in overtime, but he made the two most important shots of the night when his team needed them the most.

As he said in the locker room following the game, “I know I’m a good shooter and they had to fall some time.”

After the game, a happy and relieved Coach Erik Spoelstra told reporters he was pleased with Walker’s game, “I’m extremely happy for Henry. He played a very good basketball game.”

Spoelstra added, “He’s an excellent shooter. Sometimes you just need the ball to bounce your way one time.”

Walker scored 10 points on three of 13 from the field to go along with six rebounds, two assists and two steals.

The game was a close but low-scoring affair until the fourth quarter, when the Magic managed to create some separation from the Heat in the final minute of regulation.

Neither team scored in overtime until a free throw by Vucevic at the 2:59 mark broke the tie.

The Heat responded with four quick points from center Hassan Whiteside and Wade, and they never looked back. Wade and newly-acquired point guard Goran Dragic iced the game from the free throw line.

In his third game with the Heat, Dragic struggled his way to eight points on three for 10 shooting.  He also had five assists and four rebounds.

Small forward Luol Deng had another strong game, leading the Heat with 21 points while pulling down seven rebounds. Whiteside added 15 points and 13 rebounds.

But the player of the night was the unheralded Walker, who spoke about his NBA journey after the game: “I’ve been grinding for three years to get to this moment. I can’t even describe it. It’s something you dream about.”

The Magic were led by Vucevic with 26 points (including all five Magic points in overtime) and eight rebounds, while Victor Oladipo had 13 points and 13 rebounds.

With the win, the Heat moved 1.5 games ahead of the Brooklyn Nets (23-32) in the race for the final two playoff spots in the East.

The Heat will next play the New Orleans Pelicans at the Smoothie King Center on Friday. Tipoff is set for 8:00 PM EST, and the game will be broadcast nationally on ESPN.