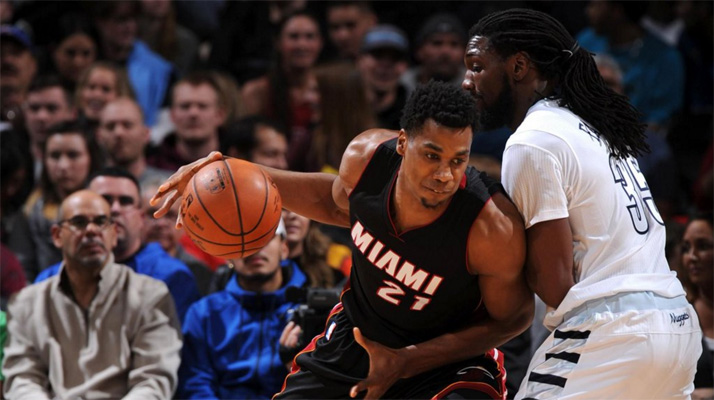 Miami trailed Denver by as many as 18 points early in the third quarter, but it was all for naught as the Heat outscored the Nuggets 52-33 in the second half. Hassan Whiteside led the charge as he notched the third triple-double of his career with 19 points, 17 rebounds and 11 blocks. The 11 blocks represents the second highest single-game total in franchise history.

With the Heat missing Dwyane Wade (sore shoulders), Goran Dragic (calf strain) and Chris Andersen (knee) from the lineup, Miami struggled mightily early on. Other than a 2-0 lead early in the game, Miami didn’t grab a lead over Denver until there were nine minutes left in the fourth quarter.

Heat assistant coach David Fizdale was asked at halftime what Miami would need to do in order to come back from a 62-46 deficit:

“Need more communication, gotta get into them more, they’re not feeling our physicality.”

The Heat did just that, as they clamped down on the Nuggets when the second half started. Danilo Gallinari, who had averaged 26.2 points in his previous 10 games, was held to just 11 points on 2-of-10 shooting from the field. Despite trailing 74-61 with a little over four minutes remaining in the third quarter, the Heat entered the fourth quarter trailing by a score of 78-76.

After a closely contested fourth quarter, the game’s final minute decided the outcome. Chris Bosh scored two of his game-leading 24 points on a fadeaway jump shot to put the Heat up 97-95 with just 55 seconds left. The Nuggets’ Will Barton tried to give Denver the lead, but failed to convert on a three-point attempt with 42 seconds remaining.

Following a Heat 60-second timeout, Bosh had the opportunity to seal the game with a jump shot from the free-throw line, only to miss the shot.

After the Nuggets called their own 60-second timeout, Denver had a chance to take a one-point lead on a Gallinari three-point attempt, only for Denver’s leading scorer to miss the shot. Bosh would then get fouled and convert on one-of-two free throw attempts before Denver’s Jameer Nelson missed a long-range two-point attempt to seal the final score.

Whiteside’s monster performance was the key to the Heat’s comeback victory. The 7-foot center commented on the importance of the win in Denver:

Beno Udrih started at point guard in place of the injured Dragic and posted a double-double with 11 points and 11 assists. Perhaps most impressive was the fact that Udrih didn’t commit a single turnover. Coach Erik Spoelstra gave credit to the veteran’s performance following the game:

“He was so vital. The no turnovers, the choreographing of our entire offensive attack and he’s such a natural point guard. He was absolutely in tune with the bench and the game plan.”

The Heat will finish their road trip at Oklahoma City when they play the Thunder on Sunday night at Chesapeake Energy Arena. The game will take place at 7 PM and it will be broadcast locally on Sun Sports.
[xyz-ihs snippet=”Responsive-Ad”]