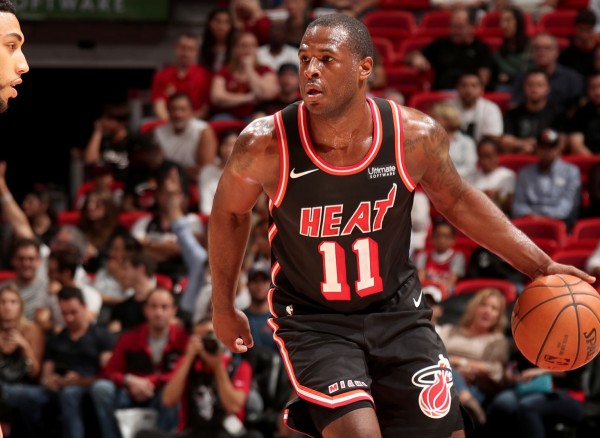 (Miami, FL) — The Miami Heat ended their three-game losing streak on Wednesday night against the Chicago Bulls in Hassan Whiteside‘s triumphant return to the court. Whiteside had missed the previous five games as a result of a bruised left knee.

Following a slow start for both teams, the Heat began nailing their shots midway through the first quarter as Whiteside got going on the boards and on offense on his way to a 13-point, 14-rebound performance. The rising star center recorded a double-double in the game with 3:39 left in the second quarter.

For head coach Erik Spoelstra, finally having his dominant big man back was not the only upside of Wednesday’s game.

“It was good to finally get a result after the work the guys have been putting in,” Spoelstra said following the game. “I liked all the emotions that these guys had to go through.”

Spoelstra couldn’t help but marvel at Whiteside’s performance, but he admitted that he could have better managed his return back to the floor.

“I thought his first seven minutes were outstanding. His rebounds, he was grabbing those 12 feet off the floor,” Spoelstra said. “And then I think he hit the wall after that, so probably should have managed that a little better.”

Point guard Goran Dragic continued his strong play, leading the team in scoring with 20 points, five rebounds, and six assists on the night.

Rookie Bam Adebayo also impressed. While he only had four points, four rebounds, and two steals in 13 minutes of play, he displayed his hard-nosed style of play that has already endeared him to the Miami faithful.

After leading by 10 points following the first quarter, the Bulls battled back into the game with a 24-10 run and went into the half down two points with a score of 49-47.

The Bulls made several runs in the game, thanks in large part to surging rookie Lauri Markkanen who had 25 points and eight rebounds in the game. Another bright spot for the Bulls, despite the loss, was second-year point guard Kris Dunn who had 11 points, seven rebounds, and five assists on the game.

Chicago led by as many as six points early in the third, but as the game continued, shooting guard Tyler Johnson began to get hot. His 19 point performance on 5-of-12 shooting with 3-of-5 from the three-point line helped fuel a 10-1 run as the Heat reclaimed the lead.

“That’s the energy and the karma of the game,” Spoelstra said. “Tyler is one of those guys that wants to play so well for the team.”

Late in the fourth, the Bulls pulled within seven at 89-82 after Jerian Grant scored from beyond the arc. Unlike their two previous games, however, when the Heat failed to edge out their opponents in the final minutes of the game, the Heat relied on successful trips to the line from Dragic, Johnson, and Justise Winslow who all went 2-for-2 in their late-game free-throw attempts to put the game out of reach.

The Heat left the court with a 97-91 victory, putting their overall record at 3-4 on the season. Wednesday’s game ends the Heat’s six-game homestand, their longest of the 2017-18 season.

They now look forward to a six-game road trip that begins this Friday against the Denver Nuggets.
[xyz-ihs snippet=”Responsive-ImagenText”]