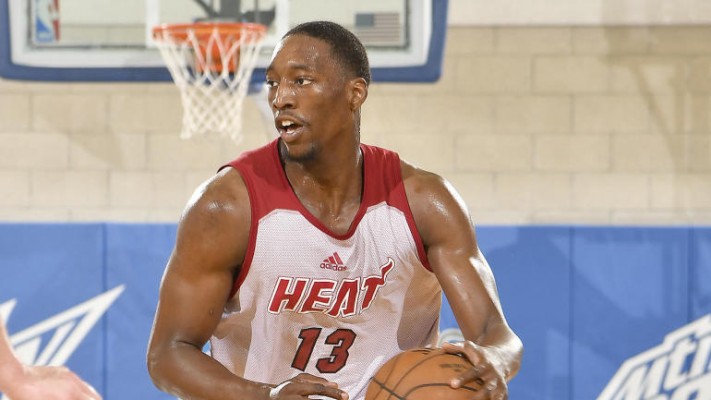 The Miami Heat‘s training camp began just a few days ago, but rookie Bam Adebayo is already making a name for himself.

According to Anthony Chiang of the Palm Beach Post, Adebayo is impressing teammates and proving that he was worth the 14th overall pick the Heat used to draft him.

“Bam’s athleticism is something you can’t not see — how athletic he is,” Haslem said. “At 19 or 20 with a 250-pound frame, it definitely stands out to you. He’s humble. He’s hungry. He’s willing to listen. He’s willing to learn. That’s all we need from him right now. Everything else will take care of itself. … The mental part is just something you can’t really fast track for a guy at 19 coming out of college. It’s just going to be a process. He’s got to understand that. He’s not going to get any calls. It’s just going to be a process for him.”

Head coach Erik Spoelstra chimed in as well, saying he’s encouraged not only by Adebayo’s play, but by his attitude.

“That’s one thing I loved about what he did in Kentucky,” Spoelstra said. “He accepted and embraced a role. That’s pro preparation, in my mind. Everybody comes in as a blue-chip player and they just want to have 40 touches a game and score 30 points a game in college, and then be one-and-done and on to the league. Very few have the emotional maturity to accept a role on a great team. So, yeah, we’re encouraged by all of that. He’s going to improve over the years with us because of that work ethic, commitment. But his willingness to take on a role I think separates him from a lot of young players in the league, because he’s going to have to be a role player.”

Spoelstra continued to say that even though he is new to the organization, Adebayo already has the qualities of a Heat player.

“I don’t want to put boundaries on him,” he said. “He has a lot of Miami Heat qualities that we like. The one thing I’ve learned over the years is when [Heat Vice President of Player Personnel] Chet Kammerer says, ‘This is my guy,’ I don’t even have to throw the monitor on and edit him. And that was Chet’s guy six weeks before the draft, three weeks before the draft, one day before the draft, 10 minutes into the draft and we had the pick available and he was there, we just said, ‘OK, Chet, this is your call.’”

Even team president Pat Riley had words of encouragement, saying that Adebayo’s college coach John Calipari thinks Adebayo still has a lot of room to grow.

“[Calipari] believes that this kid hasn’t even reached his ceiling and that he really did hold him back last year to some extent because of his point guard play and perimeter players,” Riley said last week. “But he feels like we might have the steal of the draft. It’s up to Erik and the staff to evaluate him on how he plays and how he gets into the rotation”

Despite all the positive feedback, Adebayo may have to wait to prove what he can do once the regular season begins, as the Heat frontcourt is already loaded with talented veterans like Whiteside, James Johnson, and Kelly Olynyk. Still, from the way his teammates and coaches are talking about him, it sounds like it wont be long before the entire league knows what kind of player Adebayo is.
[xyz-ihs snippet=”Responsive-ImagenText”]