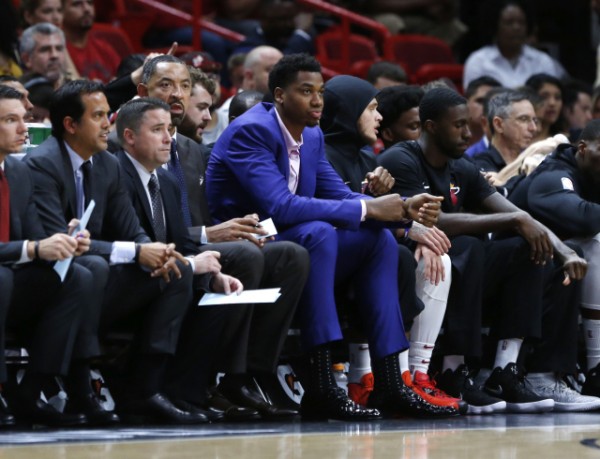 Miami Heat big man Hassan Whiteside has been nursing a bruised left knee since the Heat’s season opener against the Orlando Magic.

Whiteside has missed the last three games to let the knee heal and while the big man has returned to practice, Heat head coach Erik Spoelstra let reporters know that the center’s return will not come this Saturday against the Boston Celtics.

Whiteside practicing today but Spoelstra says he is still out for Saturday vs. Celtics.

Spoelstra spoke with reporters on Friday, telling them Whiteside is day-to-day.

“We’re still just treating him day-to-day,” he said. “We’re not planning on trying to fast track him to play tomorrow. … He’s starting to feel better.”

The Heat have performed fairly well (considering they’re missing the 2016 NBA blocks leader and 2017 rebounding leader) with a record of 2-2 on the season. While the Heat would surely love to have Whiteside back on the court against Kyrie Irving and Celtics, there is no reason to bring him back before he is fully healed.

Still, teammate Kelly Olynyk admitted that it is difficult to replicate how much Whiteside, who put up a jaw-dropping 26-point, 22-rebound performance in the opener, impacts a game.

“[Whiteside is] definitely a tough person to emulate,” he said. “You can’t really emulate his size and length under the basket, rolling and stuff. We’ve just got to play together. We’ve got to be on a string defensively, helping each other, communicating and talking. We’ve just got to play as a team. And it’s got to be a team effort on every single play — stop the ball, rebound the ball and then translate that into the offensive end.”

Whiteside’s next opportunity to return to the court will come on Oct. 30 when Karl-Anthony Towns and the Minnesota Timberwolves come to Miami.
[xyz-ihs snippet=”Responsive-ImagenText”]