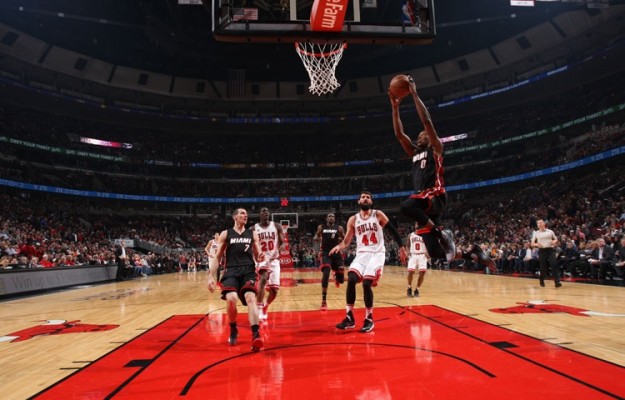 (Chicago, IL) — The Miami Heat got a combined 48 points from Goran Dragic and Josh Richardson to dominate the Chicago Bulls on Friday night at United Center.

Dragic scored a season-high 26 points on 10-of-16 shooting to go along with nine assists, while Richardson added a career-high 22 points on a super efficient 9-of-12 from the field.

The Heat used a 34-15 run in the fourth quarter to separate themselves as they easily routed the Bulls, 118-96, as the buzzer sounded.

Forward Luol Deng contributed 19 points, six rebounds, and four steals on the evening as the Heat got their sixth win in seven games.

“Once we got the lead we started to get comfortable,” Deng said, “and then they were reacting to us. We got them thinking and that is our game.”

Forward Pau Gasol led Chicago on the evening with 17 points, 12 rebounds, and nine assists, as the Bulls dropped to .500 on the season.

“When we made mistakes, they capitalized,” Gasol said. “They busted the game open and kept going and started making all kinds of shots.”

Miami really picked up their defense in the fourth as they recorded a season-high 14 steals, with six of those coming in the final period.

“We played defense and forced them to make a lot of turnovers,” Dragic said after Miami turned up its defense in the fourth. “We were really aggressive. After that, we could run. We scored a lot of points in the open court.”